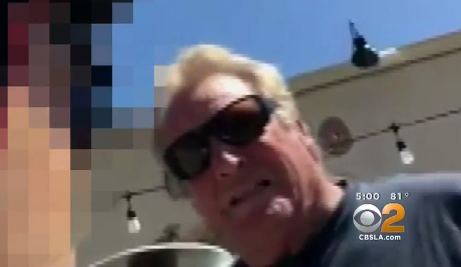 CORONA DEL MAR, Calif. -- A driver who was caught on video screaming at a bicyclist apologized Thursday.

"I'm just an old surfer, knucklehead, and I do apologize for using the words that I used," Lewis said.

Lewis, 66, was recorded Wednesday morning making threats and uttering profanity and slurs when he confronted a bicycle rider.

Watch video of the confrontation below:

The cyclist claims his elbow was brushed by Lewis's car.

Newport Beach are investigating the case.

Lewis was angry that the cyclist was in what's called a share lane. When cyclists are present, the lane is for them but drivers can use it any other time.

Lewis said he didn't understand share lane rules when he screamed at the cyclist.

"Road rage is one thing we've learned about on southern California freeways," said Bill Sellin of the Orange County Bicycle Coalition. "Cyclists experience road rage quite often in areas where people are frustrated with thick traffic."