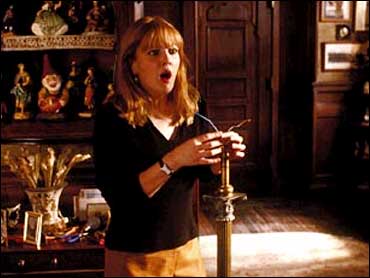 Drew Barrymore has become one of the powerful women in Hollywood, as the double-threat star and producer of such films as "Never Been Kissed" and "Charlie's Angels" and its sequel. She's back behind the scenes and costarring with Ben Stiller as new homeowners with a nightmare tenant in "Duplex."

In the film, Barrymore plays Nancy, who, along with husband Alex (Ben Stiller), gets the dream home. Then, their elderly upstairs tenant, Mrs. Connelly (Eileen Essell), puts the couple through a crash course of bizarre and lunatic landlord obligations.

What is great about the woman who plays her neighbor from hell, Barrymore notes, is that American movie audiences generally are not familiar with her work, because she is a British theater actress.

Says Barrymore, "I thought that was so cool because you don't know her as a film actress, let alone in America, so you will believe her as this character so much more because there's nothing to contradict your mind. She is Mrs. Connelly."

The film has several scenes with Ben Stiller where it is easy to tell his frustration has been improvised, notes The Early Show co-anchor Harry Smith.

Barrymore agrees, "He is so funny. I ruined so many of his takes. When the camera was on his side, he would do a lots of improv. Ruining them because he would come up with the weirdest, funniest things. He's truly so funny. He can just look at you and make you laugh."

Of director Danny DeVito, Barrymore says, "He has become sort of a master of that genre and master of that tone, so that's why we looked at him to direct this film. It was particularly 'War of the Roses' that really spoke to me because any filmmaker who takes a film about a couple doing the most sick, outrageous, horrifying things to each other and still remains entertaining is a really tough thing to pull off."

The story for "Duplex" sprang from the mind of screenwriter Larry Doyle, and it was initially inspired by a true event that happened in France. In 1965, a 47-year-old lawyer agreed to pay the $500 monthly rent on a beautiful apartment occupied by a 90-year-old woman, Jeanne Calment, until her death. At that time, the lawyer would inherit her home.

Unfortunately for him, Calment went on to become the oldest woman in the world, living until the age of 122. She died in 1997, one year after the lawyer's death at age 77.

Barrymore sums the film up: "In the end, Mrs. Connelly teaches us about our own happiness. It isn't about the extra floor, the nice furniture and the big promotion. We have to learn that the love we have for one another is actually plenty enough. It's just that simple."