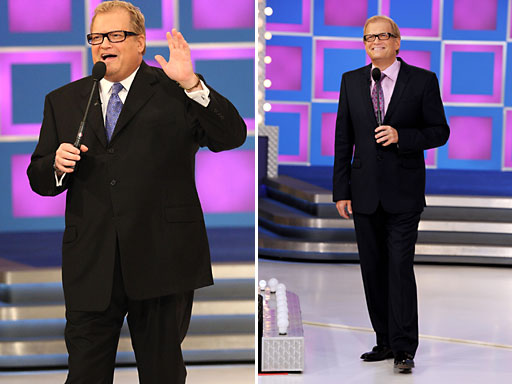 (CBS) Fans of Drew Carey know that the "Price is Right" host lost a lot of weight in recent months, dropping a whopping 80 pounds since January.

But some audience members were astounded to see his amazing metamorphosis when the show's 2010 season kicked off today.

According to People magazine, Carey, 52 went from a size 44 pants to a 33-34. And he did it the old-fashioned way - diet and exercise.

He cut back on simple carbs, snacked on fruit, and drank lots of water.

He also hit the gym, doing cardio for at least 45 minutes a day, according to the magazine.

Not only did he lose weight, he lost his type-2 diabetes. "I'm not diabetic anymore," he told the magazine. "No medication needed."

"It sucks being fat, you know," he said last Wednesday at a party in Beverly Hills.

"I like being skinny," said Carey. "I was sick of being fat on the camera. Really, I just got sick of it. Once I started losing weight, again, like once I started dropping a couple pant sizes, then it was easy 'cause once you see the results, then you don't wanna stop."