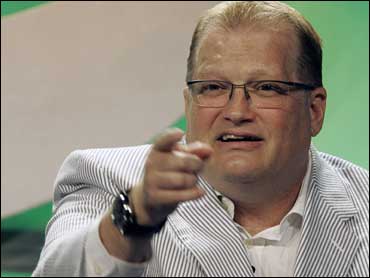 Drew Carey, the new host of "The Price Is Right," got engaged to Nicole Jaracz, a recent graduate of culinary school, on Tuesday, said his spokeswoman, Christina Papadopoulos.

"It will be the first marriage for both. No date for a wedding has been set yet," said Papadopoulos, adding that Carey and his bride-to-be are "very happy and excited about their future together."

No further details were provided.

It wasn't until the 49-year-old comedian became the new face of "The Price Is Right" that he realized game shows were his true calling. Carey makes his "Price" debut on Monday.

"Unbeknownst to me, I was preparing myself to be a super game-show host of the 21st century," Carey says with a smile between tapings at CBS' Bob Barker Studio. "I wouldn't be good at this if it wasn't for all that other stuff I did."

He started with standup and starred in "The Drew Carey Show" and "Whose Line is it Anyway?" before saying goodbye to TV in 2004. Carey was enjoying a semi-retired life of leisure when he was tapped to host a new CBS game show, "Power of 10."

Carey says he got "kind of trashed" when his sitcom ended so he was reticent to return to TV.

Photos: All About Drew Carey

"It kind of left me with a bad taste in my mouth," he says. He accepted the "Power of 10" gig "only because it was a smart show and I thought nobody could make fun of me if I did that."

2Then he was invited to take Barker's place on "The Price Is Right." Carey immediately declined. Worst-case scenarios filled his mind.

"If you think I'm going to sit at 'The Price Is Right' so everybody can take potshots at me, forget it," he remembers thinking.

CBS called again a few weeks later and convinced Carey he was just who they were looking for. His friends and advisers told him to go for it. Suddenly the semi-retired comedian who spent his time reading and taking photography classes was coming back to television in a big way with daytime and prime-time game shows.

Carey studied games from "The Price Is Right" such as "Pick-a-Pair" and "Line 'em Up" as he shuttled between "Power of 10" tapings in New York and "Price" tapings in Los Angeles.

"Power of 10," in which contestants try to predict how most Americans respond to moral, social and political poll questions, is "stimulating," Carey says. But it was "Price" that showed him he was a born game-show host.

"It's like meeting the right girl," he says. "This is a really good fit. I'm really comfortable here and it seems like I should have been doing this a long time ago."

Barbara Bloom, senior vice president of daytime programs for CBS, says Carey is "the perfect choice for the job."

"I can't wait for people to see how well Drew has taken to the show," she says. "There's just something special about the way he's made the position his own in such a short time and has endeared himself to everyone, both in front of and behind the cameras."

Other than its new host, nearly everything else on "The Price Is Right" is the same as it was during Barker's reign. The games are unchanged. The new, portable set looks almost exactly like the one it replaced.

Contestants still "come on down" wearing customized T-shirts, only now they honor the new host instead of the former. (One group wore matching tops that read "Drew's Crew." Another had shirts bearing the blue eye-shadowed image of Mimi from "The Drew Carey Show" and the phrase "Carey's Beauties.")

While Barker typically took questions from the crowd during commercials, Carey switches it up, interviewing the audience to learn where they've come from and what they do for work. "It's fascinating to me," says the self-described "people watcher."

But Carey closes the show each day the same way Barker did: "Have your pets spayed or neutered."

"It's a tradition," he explains. "It's been here all this time. I don't want to get rid of that."

The new host has added his own end-of-show touch, though. Once the cameras have stopped rolling, Carey urges the crowd to "keep hoping for the best for others" as they do when they cheer for their fellow audience members who end up as contestants on the show.

The 83-year-old Barker, who hosted "The Price Is Right" for 35 years and "Truth or Consequences" for 19 years before that, says he plans to tune in to see Carey's take on "Price."

"Of course I'm going to watch. I'm curious just like everybody else," Barker says, adding, "I hope he gets a huge rating."

Contestant LaShawn Warner, who won an assortment of sleds during a recent taping of the show, predicts Carey will be just as popular as Barker was.

"Once people start watching it, they'll get into Drew like they were with Bob," she says. "He's just so silly. He keeps it interesting and he keeps it fun."

Fans can't help but compare the only two hosts the venerable show has had, but Carey won't.

"You can't replace Bob Barker," he says. "I don't compare myself to anybody. ... It's only about what you're doing and supposed to do, and I feel like I'm supposed to be doing this."