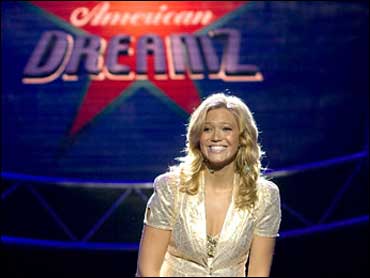 "Imagine a country where more people vote for a pop idol than their next president," is how the promotion reads for the new movie, "American Dreamz." And judging by the massive success of the "American Idol" series, it's really not so very far-fetched.

"American Dreamz" is based on an "Idol"-type talent show and stars Mandy Moore as one of the contestants, a wannabe named Sally Kendoo. Moore joined The Early Show Friday and described her character's intense personality.

"She is kind of sociopathic," she told co-anchor Tracy Smith. "She rides that fine line between being very sweet and sort of a little sour, too. She's just very driven and manipulative and she sort of knows going in that if she even gets on the show she knows how to win. She's such a fan of the show. She's in it to win it."

Moore, who started her career as a recording star before jumping to the big screen, has maintained a wholesome image off-screen and says it was fun to take a crack at a bad girl role.

"I think as an actress you sort of try and gravitate towards these roles because they're so much meatier and so much more fun," she said. "I liken it to free therapy because I get to go home at the end of the day and not sort of bring any of that with me. I leave all the darkness and anger at work."

In "American Dreamz," Hugh Grant plays the contest's host in a Simon Cowell-type character, and Moore found herself somewhat star-struck in their scenes together.

"He is the epitome of a movie star, and I never sort of got over that nervous energy around him," she said. "He's just an intimidating figure. Not that he means to be. But he's just Hugh Grant and he's so handsome and charming and every woman on set just like melted a little every time he walked by."

The movie is largely about America's obsession with pop culture and that's an issue Moore has learned to grapple with in her own life. As she told Smith, she is able to keep that aspect of her career in healthy perspective.

"At the end of the day, I'm really lucky. I have a wonderful family. I love my parents and I think they raised me and my brothers right," she said. "I sort of feel like there's this on/off switch. Like, I'm at work right now and it's great and I love what I do and I feel really lucky. But at the end of the day I know I'm going to go home and everything is normal and you really don't feel any different from anyone else."

She's also learned by experience to keep her personal relationships out of the spotlight. She's currently dating actor Zach Braff, from "Scrubs," but keeps details to herself.

"I've made the mistake in past relationships of obviously being very happy and, of course, you want to tell the entire world. But it sort of takes a little piece of that, you know, intimacy and relationship kind of away from you," she said.