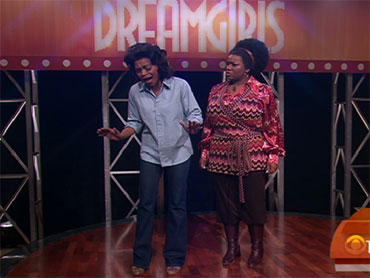 "Dreamgirls," the Oscar and Tony winning musical is making its way back to the stage.

The show follows three young singers on their road to stardom and is currently playing at Harlem's famed Apollo Theater until Dec. 13, before a nationwide tour.

"Dreamgirls" cast members, Moya Angela, who plays Effie, and Syesha Mercado, who plays Deena, stopped by The Eary Show to perform the Academy Award nominated song "Listen," which was in the film (and performed by Beyonce), but not the original Broadway production.

"Dreamgirls" first opened on Broadway in 1981, and received a warm welcome along with many awards. The powerful drama tells the story of an up-and-coming 1960's female singing group and the triumphs and tribulations that come with fame and fortune.

Mercado, also a recording artist, rose to fame as the second runner-up (and the last female standing) in the seventh season of Fox's "American Idol." She also appeared in the "American Idol LIVE Tour 2008," performing 53 concerts in 49 cities in both the United States and Canada.

Angela, who is making her New York debut, is from the cast of Disney's "The Lion King" Gazelle and Cheetah tours. Her roles included Rafiki and Shenzi. An Indianapolis native, she won two Encore Awards in her roles as Sara in "Ragtime" and Adapearle in "The Wiz."

To find out when the "Dreamgirls" tour comes to a city near you, click on the show's official Web site.

Click below to watch Mercado and Angela perform "Listen."