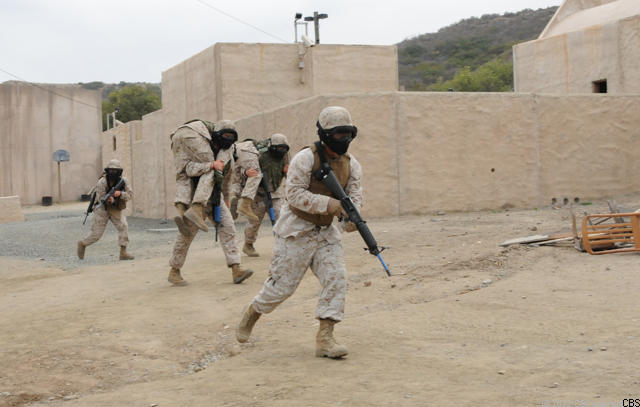 (CBS News) A final tour of duty for the last U.S. Marine battalion in Afghanistan begins this week. In a report that aired Friday on "CBS This Morning," CBS News correspondent Jeff Glor reported from the Mojave Desert, where some of the last American troops are finishing their training before deploying to Afghanistan to wrap up the American mission there. The men of the 2nd Battalion, 7th Marines are being deployed to handle Afghanistan's notoriously troubled Helmand Province. The battalion will face the region alone, just one-third of the amount of troops NATO deployed to manage province.

"A lot of it is just understanding the mission. It's really a matter of taking a look at how are we going to get there, to make sure that when we go out the door, there isn't a void that collpases back in," Lt. Col. Donald Tomich told Glor, referring to the concern about the potential for a power vacuum to develop when Western troops leave the country.

These days, the Marines' missions in the region are not combat-oriented. Rather, U.S. military in Afghanistan is focused on shifting the responsibility they once had to the Afghan National Army. At the base in California, mock Afghan villages are filled with more than 400 role players, most from Afghanistsan. The goal for the troops is to win over a skeptical population through face-to-face meetings in these villages.

While many in the 2nd Battalion, 7th Marines unit enlisted with the hopes of seeing combat, they are training for a hearts and minds mission.

"I believe most of them understand why we have to do what we're doing now," Sgt. Maj. Michael Woods explained to Glor. At the end of the day, this is about a campaign that's lasted over a decade, and this is about making sure that we close this chapter so our sons don't have to finish the war that we campaigned on."

By the end of 2014, the Afghan National Army is expected to be the only line of defense against the Taliban in Afghanistan.

"It's tough to put the trust in the Afghan National Army and afghan National Police to do it. I guess if we build a good relationship, it should work," Sgt. Travis Beattie told Glor. "There's no guarantees ever in Afghanistan," he added.