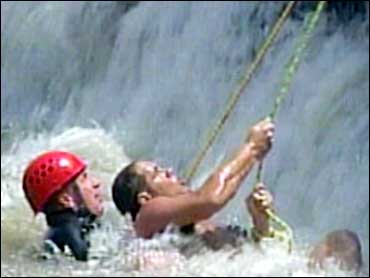 It was a close call for 28-year-old Matt Baker after he almost drowned in six-foot waves. Not in the ocean, but in Lake Erie.

"I was right in there," Baker says.

Scott McFarland from CBS Cleveland affiliate WOIO-TV reports, the Cleveland, Ohio, resident was trying to measure the dock near his house, when he became trapped by the churning surf.

"And each time a wave came crashing in, I mean, it pummeled me, but I was holding on pretty tight," he says.

In fact, the waves were so powerful the coast guard had to turn around, and rescuers were almost swept off the dock. As Baker screamed for help, a fire department diver convinced the drowning man to lunge toward him and grab his wrist.

"I was able to, for lack of a better term for it, lasso his wrist, and we worked together and I got him out," says firefighter Larry Heczko

In a tug of war against the waves, the two were finally hauled out by rope. After being trapped for an hour-and-a-half, Baker was back on dry land, exhausted and battered but alive.

Chief Larry Grizzell of the Avon Lake Fire Department says, "With the strength of those waves and the way he was getting beat up in there, I'm surprised he did survive."

Amazingly, Baker escaped the ordeal with only a fractured leg and hypothermia and a lost his bathing suit, which was swept away by the Lake Erie waves.

Baker notes, "I'm a great swimmer, and I guess you could be the best swimmer in the world and it just has no bearing on any of that."

A great swimmer, but no match for this Great Lake.

"Basically Lake Erie does whatever Lake Erie wants to do," Heczko tells The Early Show. "It's very susceptible to weather and conditions. So at any point in time, it could be as calm as calm as it is today, and at other times it can be as rough as five, six, seven-foot waves. And it comes and goes, as it wants to."

Once he got to the scene Heczko he notes the other diver was unable to make a successful rescue because of the amount of equipment he had on so he tried with less equipment on.

He says, "I had a safety helmet on so I didn't injure myself. I kept my equipment light as best I could and I was able to come off the side with a safety harness and a rope. I trusted my guys. I had complete faith in them that I wasn't going to go anywhere. The matter was at that point in time to get Matt out."

Heczko points out his fear was to lose Mr. Baker. He says, "I didn't want anything to get worse than it already was, and my thought process was once I get a hold of him, just not to let go of him. I knew that I would be as safe as I could be, and I was just not going to let anything worse happen to Mr. Baker at that point."

Heczko was the last person out of the water. By the time he came out, Matt Baker had already been taken to the hospital. Asked if he had heard from Baker, Heczko says, "No, I haven't. When this was over, I went back to the station, cleaned up and i went back and painted my son's bedroom. But the other people on station said he was very thankful."