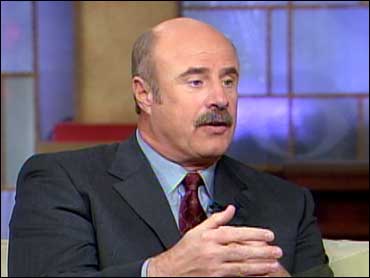 For many single women, dating can be difficult and disappointing. But America's therapist, Dr. Phil McGraw, says it doesn't have to be that way.

His new book, "Love Smart: Find the One You Want — Fix The One You Got," Dr. Phil offers advice to get through the dating maze and help find your Mr. Right. He returned to the The Early Show to talk with co-anchor Rene Syler about how to do just that.

In his book, Dr. Phil says that dating is "simply one of the most inefficient, non-productive, haphazard, hit-or-miss ways to try to achieve one of the most important objectives of your entire life."

"Really, think about it. When you decide 'I want to find a life partner, I want to get out there and make it happen,' nobody has a plan," he says. "So it's like, well, maybe somebody will introduce me to somebody, or maybe I'll just turn the corner and bump into somebody or I'll go to a bunch of clubs and it's loud and smoky and you can't hear. That's just like a meat market where you're just hanging over, people walking by you."

Dr. Phil says you must have a plan where you create what you want.

"That's what 'Love Smart' is all about," he says. "Don't love dumb, love smart. Have a plan and work your plan."

On his show, Dr. Phil acted as a coach for a woman while she was on a date. Here is his advice:

"Take control from the beginning and ask him, 'Where are you from?' " Dr. Phil says into Wendy's ear.

"So where are you from?" Wendy asks her date.

"I live in Redondo Beach, but I moved here 2 1/2 years ago from Chicago," the date replies. "How about yourself?"

Next, Dr. Phil says: "I want you to really spend some time consciously making eye contact with him. It will be absolutely mesmerizing. You're doing great. Look right at him."

As Wendy establishes eye contact, the date says, "We should look at the menu. Are you sold on anything?"

"Say I was paying more attention to you than the menu," prods Dr. Phil.

How did she do?

"Wendy is just a delightful woman," Dr. Phil says. "She described herself as the worst wall flower ever, with drab clothes, she would look at the ground, never got a second date — ever. So we freshened her up a little bit and then put her out there.

"I said 'Let's make some eye contact, ask some meaningful questions.' You don't care what his sign is. Find out what you want to know and decide what it is you want him to know and make sure you deliver that information on that first date. The worst thing in the world you can do is if you go to a party and you meet four or five guys, and the next day not one of them can remember you.

"I would rather four of them say they didn't like her, and one guy say I really liked her. If you are an environmental non-event, are you going to be lonely."

Since most women can't have Dr. Phil accompany them on dates, he's come up with a list of "Do's & Don'ts" to make sure that every woman can create a good first impression.

Dr. Phil says filler questions lets the other person know you are interested in what they have to say.

"Conversation is a style. There's an art to it and everybody has their own style," he says. "But one of the things you need to do are minimal encouragers, where you let the other person know, I'm hearing what you're saying. I'm interested in what you're saying, with what you're doing right now. You're nodding while I'm talking and making eye contact with me and you just said 'right.' (Those are) three signs that you're tuned in to what I'm saying.

"These are conversational skills that encourage people to come along. Make no mistake; everybody likes to be the star. And if you go out with somebody and they leave that date saying, 'she really liked me,' we like people who like us."

If you're a great audience, people are going to love you.

"A lot of people show up to a relationship with baggage," Dr. Phil says. "I mean they haven't done an autopsy on their prior relationship, they have unfinished emotional business. They come in, they've got a chip on their shoulder. So when they get into the date, they start just giving all of that up. 'Here it is, here it is. My ex did this, my ex did that.' Or they start telling too much about themselves. Let people ease into it. If they're just rolled over on their heels, those are all serious don'ts."

Dr. Phil says you don't want to be somebody you're not.

"When I say 'do' be interested, if you're not, move on," he says. "But if you're there, let them know that you are and then don't try to run them off under the get-them-before-they-get-me theory. It's all about what you ask. The chapter on infrared dating is very important. I've got a chapter on negotiating — the 'bag him, tag him and take him home.' Because if you want to close the deal, there is a way to close the deal. We talk about that."

What about sex on a first date?

"I think that's a huge bad deal. Huge bad deal," Dr. Phil says. "I don't care if you answer that from a moral standpoint or some other standpoint. But what are you gonna do next? You've got to keep some mystery about there. You give it all up at first, like my mom used to tell my sisters, 'Why buy cow if you get the milk free.' "

Wednesday morning on The Early Show, Dr. Phil returns with his wife, Robin, to talk about couples who are stuck in a relationship rut.

Tips For The Perfect Grilled Steak