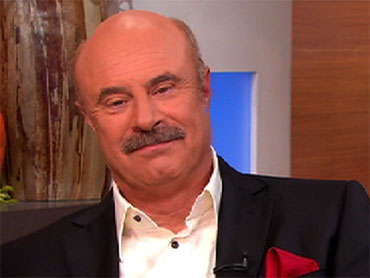 More than 160,000 children miss school every day because they are scared of being bullied, according to the National Education Association.

Bullying is a national problem, often with tragic results. But Dr. Phil McGraw, host of the popular show "Dr. Phil," has begun a fight against this behavior, delving into the topic several times on his show and even traveled to Washington, D.C. in June to bring the topic to the fore. While in the nation's capital, he spoke in front of the Subcommittee on Healthy Families about the prevalence of bullying and the serious public health and safety risks associated with cyberbullying.

On "The Early Show" Thursday, Dr. Phil appeared on the broadcast to talk about what he's now calling a childhood epidemic.

Dr. Phil explained, "I said nine years ago when I started the 'Dr. Phil' show one of the things we would focus on are the silent epidemics in America. I'm trying to make this not silent. I want us to tune in and know what's going on here."

Co-anchor Maggie Rodriguez remarked, "These keyboards bullies have the benefit of hiding behind their computers and it's so easy for them to target vulnerable people."

"There is no empathy involved here," McGraw replied. "When you are not having to look at your victim, when you don't see the pain in their face, when you don't see their eyes, then it's so much easier for you to say cruel things. And crueler things are being said than would be said person to person. And, you know, the thing that I'm worried about, Maggie, is these bullies have parents. Where are the parents of these bullies? How do they not know what their child is doing either on the school bus, at school, on the keyboard, wherever it may be?"

In a recent show, Dr. Phil apologized to children.

On "The Early Show" Dr. Phil said, "I just hate for (gay children) to think that nobody cares, that all the adults in this world that are not doing anything don't care. … It sends a message and these kids, think, look adults don't get it. They don't care. But that's not true, we do get it and we do care and we need to let them do that and do something about this."

But how do you prevent tragedies like Tyler Clementi's suicide after allegedly being videotaped by Rutgers classmates from happening?

"I'm sure that people don't think -- because I've talked to a lot of bullies that have now grown up -- and they say, you know, when I was doing that, I had no idea the impact that it had. I was not aware of the pain it was causing. Well, let's make them aware now. Let's teach these kids that words are powerful and that, when you say things that cut into someone, it changes who they are. You say it, then they go home and repeat it to themselves a thousand times. And it changes their personality. It changes their future. It changes the way they raise their kids when they grow up."

He added, "If we turn a bright light on over this maybe parents will have a sit-down with their kids and say, 'I want to talk to you about bullying. Are you being bullied and are you a bully?' Let's have those conversations -- not a conversation -- but a dialogue they need to have."

For parenting tips from Dr. Phil on the bullying warning signs and what you should do if you think your child is being bullied, click on the video below.