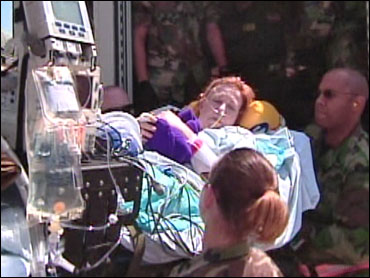 CBS News correspondent Kimberly Dozier, seriously wounded in Iraq by a car bomb that killed four other people, is on her way back to the United States Wednesday. Dozier, who is flying out of Germany, will be heading for Washington, D.C., and still faces a long road to full recovery.

Dozier will fly into Andrews Air Force Base near Washington, D.C. and will be admitted into Bethesda Naval Hospital in Maryland.

Linda Mason, Senior Vice President, Standards and Special Projects, CBS News, who has been with Dozier since her arrival at Landstuhl Regional Medical Center, reports the swelling of Kimberly's face has decreased significantly, she had the first physical therapy session on her legs Tuesday, and she had her hair washed.

Dozier, 39, was critically wounded May 29 while reporting a story last week in Iraq. The attack killed her camera crew — Britons Paul Douglas and James Brolan — as well as a U.S. soldier and an Iraqi translator.

She underwent two emergency surgeries in Iraq before being flown the next day to the U.S. military's Landstuhl Regional Medical Center in southern Germany. She suffered head and lower body injuries, and her family said she would need rods in her legs.

She was initially scheduled to be flown home Sunday, but the plane expected to carry her was full.

On Saturday, Dozier was able to eat solid food for the first time since the blast. Her father fed her cream soup, orange juice and chocolate pudding.

When Dozier first arrived in Germany she could not talk or breathe and was immobile. Now she is sitting up, talking with her family, cracking jokes with her boyfriend and eating.

"She's sharp as a tack. Really," Dozier's father, Benjamin, told CBS News correspondent Sheila MacVicar last Thursday. "She knows where she is. She knows the questions to ask."

Her first question then was: "What (happened to the) crew?" Her family and doctors agreed, if she asked, that she should be told what happened — that Brolan and Douglas died in the attack.

The suburban Baltimore high school from which Dozier graduated more than 20 years ago honored her Sunday at its graduation.

"Kim provides an incredible example for us of an ordinary person just like you doing the extraordinary," said St. Timothy's headmaster Randy Stevens.