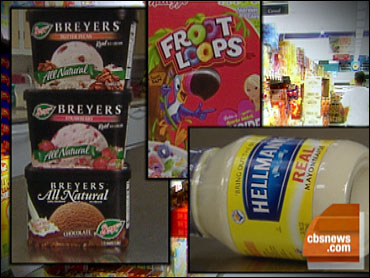 Food companies are shrinking the size of packaging and of the amount of stuff in those packages, and sometimes charging more to boot, Early Show consumer correspondent Susan Koeppen points out.

As the cost of commodities rises, food companies have been "downsizing" products such as cereal, soap and mayonnaise -- and the amount of product in those packages. But, reports Early Show consumer correspondent Susan Koeppen, prices are being kept the same or even hiked, so consumers are, in many instances, getting less and paying more.

And, Koeppen notes, experts say the tough economy will mean more and more companies will turn to downsizing.

She loves a bowl of her favorite ice cream after a long day at work. But she doesn't love what's happened to the package it's coming in. It's been downsized and now, she says, there's "a premium" of Edy's ice cream in her house.
]
"It makes me feel like I have been duped," Yadina says. "It makes me feel as if they don't think we aren't smart enough to notice that we're getting less and less for our money."

From ice cream, to mayonnaise, to peanut butter and many other items, Koeppen observes, products at the supermarket have been getting smaller, while their prices stay the same or even increase.

The average consumer may not have noticed the slight change to Apple Jacks, for instance, from 17 ounces to 15. Same with Fruit Loops, from 19.7 ounces to 17.

And Todd Marks of Consumer Reports tells Koeppen he thinks making packages smaller is going to get bigger than ever, with more and more products going that route as the cost of raw materials increases and as our economy continues to go South: "I go to the supermarket all the time paying attention to these things, and there is virtually no product that's off limits to downsizing."

A Hershey's chocolate bar that was eight ounces is now 6.8 -- AND its label reads "Giant bar."

"When they decided to shrink it," Marks points out, "they put the word 'giant' on the package to make you think the giant is really a giant. Well, it is giant, but it's smaller than the giant that used to exist."

Marks says consumers rarely notice things like the tapering of ice cream containers, cereal boxes that get thinner, or jars that now have concave bottoms.

"Another tactic," Marks says, "is to make things like plastic bags thinner. The mils of plastic will be a little bit thinner, so your garbage bag may not be as strong as it used to be. To make the sheets of your roll of paper towels a little bit smaller in dimension or to make them a little thinner in plies" are typical of other techniques being used.

Koeppen says CBS News contacted several of the companies that make the products she mentioned -- Hershey's, Hellman's, Breyers and Kellogg's -- and all said the rising cost of commodities has lead to a change in the way they make and package some of their products. But they pointed out that many of their other products haven't changed. But they admitted tough economic times have lead to some changes.

One small bright spot Koeppen remarked about: milk. "People are gonna notice if a gallon of milk is no longer a gallon!" she says.