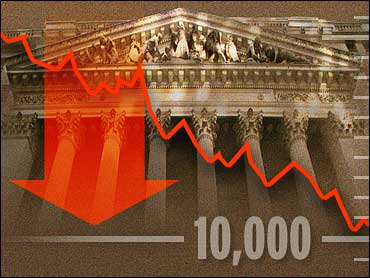 Interest rate fears drove a major sell-off on Wall Street Monday, with the Dow Jones industrial average closing below 10,000 for the first time since Dec. 12 and sending all three major indexes to their lows for the year.

The dread that has sent stocks tumbling over the past four weeks intensified after Friday's employment report from the Labor Department — the United States gained 288,000 new jobs in April. Investors feared the news would prompt the Federal Reserve to raise rates as early as next month, and selling spread around the globe Monday, sending overseas markets tumbling as well.

"Of course, psychologically, Dow 10,000 has some short-term effects on the market," said Stuart Freeman, chief equity strategist for A.G. Edwards & Sons. "Long-term, the markets still look at corporate fundamentals, earnings, that sort of thing. But we do have some inflation and interest rate fears in play which could keep things lower, at least for now."

Paul Nolte, director of investments at Hinsdale Associates, told CBS MarketWatch the Dow's drop below 10,000 was something of a "foregone conclusion."

"You've had the Nasdaq below 2,000, the S&P slowly moving below 1,100 and the Russell also breaking down," Nolte said. "It was just an eventuality that the Dow would break below that magic number."

Nolte said weakness was due to heavy selling on global markets over interest rate concerns and worries about a worsening political situation, both abroad and on the domestic political scene.

Meanwhile, there was concern that new photos of U.S soldiers abusing Iraqi prisoners could further destabilize the Bush administration.

Brian Westbury, chief economist at GKST Economics, said it was the latter, and not the rate fears, driving equities lower. "The negative reaction in stocks, to the extent it is driven by fears of rising rates, is also overdone," said Westbury.

"The Fed could triple rates tomorrow (to 3 percent) and Fed policy would still be accommodative. It is terrorism and Iraq that are driving stock prices lower, not the Fed."