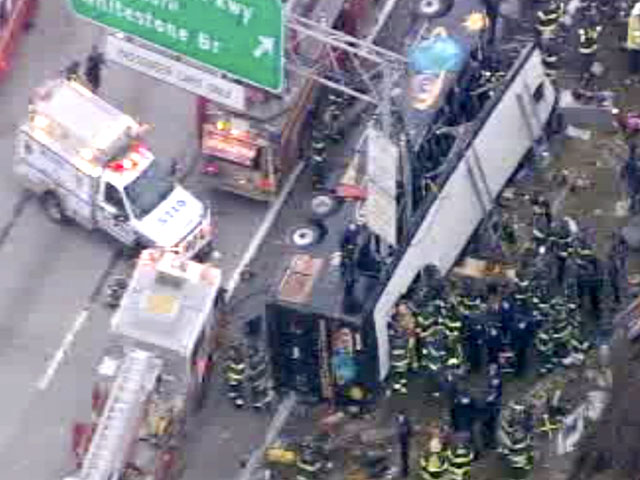 NEW YORK - Passengers and witnesses to a horrific New York City crash that sheared the top off a bus and killed 14 people told investigators that the driver's account of getting clipped by a tractor-trailer didn't match up to what they felt and saw before the vehicle slid off the road and into a sign pole.

Driver Ophadell Williams had told police that his World Wide Tours bus was hit just as it crossed the New York City line early Saturday on a trip from the Mohegan Sun casino in in Connecticut.

But passengers said Williams had already swerved at times to the right for no reason before the accident, a law-enforcement official said Sunday. The official wasn't authorized to speak publicly about the probe and spoke on condition of anonymity.

Williams remained hospitalized in serious condition Sunday and has not commented publicly. His family could not be reached.

As many as 20 passengers were treated at hospitals following the accident. Nine, including the driver, remained hospitalized Sunday, according to spokesmen for St. Barnabas Hospital and Jacobi Medical Center in the Bronx. Most were in critical condition.

Officials at Jacobi were still trying to identify one passenger, an Asian man in his 50s, said spokeswoman Barbara DeIorio.

"He's very injured, he's not able to communicate yet," she said, adding that the man was in the surgical intensive care unit.

The 14 victims - eight men and six women - all died of blunt force trauma, said Ellen Borakove, a spokeswoman for the New York City medical examiner's office. She said the office was working with family members to identify them.

Some of the 31 passengers were still asleep when the bus crashed at 5:35 a.m. Saturday. The bus scraped along the guardrail for 300 feet, toppled and crashed into the support pole for a highway sign indicating the exit for the Hutchinson Parkway. The pole knifed through the bus front to back along the window line, peeling the roof off all the way to the back tires.

The bus was one of scores that travel daily between Chinatown, in Manhattan, and the Foxwoods and Mohegan Sun casinos in southeastern Connecticut.

Mohegan Sun, in Uncasville, Conn., has estimated a fifth of its business comes from Asian spending and caters to Chinese-American gamblers. Its website has a Chinese-language section offering gaming and bus promotions.

He said in the past three years, there have been a handful of serious accidents involving discount buses taking people from New York's Chinese community to casinos.

"The drivers tell me that they're often very tired," he said, adding that salaries are low and drivers work long hours.

Calls to World Wide Tours seeking information on Williams' service record or how long he had been with the company were not immediately returned.

The accident tossed passengers all around the bus, with most people hurled to the front of the bus on impact, authorities said.

The National Transportation Safety Board sent a team of investigators and planned to hold a briefing later Sunday.

Christopher Hart, the vice chairman of the NTSB, said the team would be looking at the motor carrier's safety programs, including those involving driver fatigue, as well as highway design and the bus itself. He said that part of the investigation could take several days.

Many of the passengers on the bus were Chinatown residents. They ranged in age from 20 to 50, officials said.

Oanfa Quan, who runs a company that provides wigs and medical prostheses, said she was working with the Lin Sing Association to provide wigs in case some of the victims need them for burial.

"Usually the family wants it for their own peace of mind," she said. "Even if the casket is closed, they still want to know that their loved one looks the way they were prior to the accident."