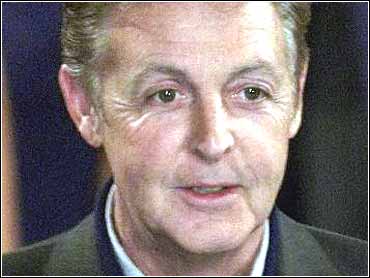 Beatles fans received a double treat Tuesday with announcements of a new world tour by Paul McCartney and the release of a DVD of a 1994 jam session by McCartney, Ringo Starr and George Harrison.

McCartney said he plans to include several Beatles songs in his first British tour in a decade, scheduling 22 songs from his Fab Four days for each two-and-a-half hour arena concert.

Seven dates in April have been announced for the "Back in the World" tour, including stops in London and Manchester, northern England. McCartney then plans to tour France, Spain, Germany and Scandinavia.

The world tour follows McCartney's 2002 "Back In The U.S." tour - a series of performances that earned him Billboard magazine's Tour Of The Year prize.

McCartney said he's learned to give audiences what they want.

"So that means we'll be playing some of my Beatles stuff - rather a lot of Beatles stuff, actually - some Wings stuff and some more recent stuff. So basically the show pretty much spans my whole career," the 60-year-old said.

Fans also will be able to buy a DVD of the reunion performance by McCartney, Starr and Harrison that was filmed in 1994. It was the only time the three played together after the band split up in 1970.

Harrison died in November 2001 after a long battle with cancer. John Lennon, the fourth Beatle, was shot dead in New York in 1980.

Due to be released at the end of March, the hour-long DVD was shot at Harrison's studios at his mansion in Henley-on-Thames, Oxfordshire. The songs are mainly staples from their early performing days, including "Blue Moon Of Kentucky," "Ain't She Sweet" and "Thinking of Linking."