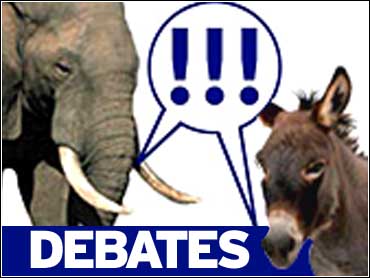 Two presidential debates in New Hampshire Wednesday night gave candidates a last chance to define themselves, and more importantly to define each other, before next week's primary. All seven candidates are feeling the heat after their Iowa showings, and know that next Tuesday could make or break them.

Back in Iowa, and again in New Hampshire, abortion emerged as a contentious issue among the Republicans. George W. Bush fended off a sharp question from Gary Bauer, who needs every pro-life vote he can get. Alan Keyes took on John McCain, who said earlier in the day that if his daughter were considering an abortion, it would be her choice; later he amended that to say it would be a family decision.

"I think that displayed a profound lack of understanding of the basic issue of principle involved in abortion," Keyes announced. McCain, who had all day to figure out how to feint this attack, first affirmed his pro-life voting record in the Senate, and then haughtily said: "I will not draw my children into this discussion."

For good measure, McCain later seized an opportunity to say that he'd seen enough killing in his life (an adept reference to his military record, which he's parading in ads right now), adding "I don't need a lecture from you."

Keyes didn't blink, and his debate performance reinforced the idea that he's almost in this for the fun of it. One can't doubt the strength of his convictions, but he seems looser and less intent on hitting key issues than any other candidate. Not surprisingly, Keyes parried neatly a rather sill question from Bauer about his foray into the mosh pit in Iowa.

"You know why I did that? Because I think that exemplifies the kind of trust in people that is the heart and soul of the Keyes campaign," he said. "When you trust them, they will, in fact, hold you up."

Bauer, by contrast, seemed the most desperate of the lot. He decided to make China the center of his attack. It's refreshing to hear from someone who isn't in a rush to embrace the mighty Communist trading partner to the east, but it seems improbable that Bauer will be swept into office by a crowd shouting, "No more most-favored-nation status for China!"

Steve Forbes whined about the debate's format and said the rules were always being changed to keep "independent outsiders" like him out. His main effort consisted of attacking Bush on taxes and education. Forbes said educational standards in Texas had fallen since Bush became governor, and asked "how are you going to improve education nationally when in Texas it's gone down?"

But you don't call Texas dumb and get away with it, Bush hinted, pointing out the state's significance in the electoral vote. Bush refuted Forbes' claims and drew attention to his own educational plans by asking why McCain didn't support them as well.

There were moments of testiness among the Republicans, particularly between Bush and McCain on their respective tax plans, but the mood was nothing compared to the Democratic brawl that followed.

Early on, Bill Bradley fielded a question about whether he could be a good fighter in a national campaign. He mildly said yes, he could, and then went on to fight for the rest of the night. But he's no happy warrior, and he seemed harsh where Al Gore seemed cool.

CBS News correspondent Phil Jones reports.
Predictably, he and Gore clashed on health-care. The dispute culminated with each accusing the other of deflecting attention from his own plan's problems by attacking his rival's plan. Bradley got so wired he accused Gore of saying untrue things, at which point Gore said "Let's keep it on the substance of the issues. I haven't accused you of lying."

Bradley also cited a Boston Globe story on the vice president's connection with various lobbyists. "How can you be fighting for the people when you're working hand in glove with the special interests who are fighting essentially against the people?" he asked. Gorlaughed, always a good way to belittle your opponent, and insisted he'd never had trouble standing up to special interests.

There was plenty of attacking going on, much of it centered on the very idea of attacking. Both Democrats were eager to lay at the other's door the charge of negative advertising. Bradley cited a Gore ad which he called "unfair and misleading," and queried "Why should we believe that you'll tell the truth as president if you don't tell the truth as a candidate?"

Gore shot back: "That's not a negative attack?"

And it went on, and on, from there. The moderators sat by helplessly as the pair threw format to the wings and continued to spar.

Most polls show this race too close to call, so it's hardly surprising Bradley and Gore went at it hammer and tongs. But who could have anticipated an argument in a Democratic debate over abortion?

Bradley questioned Gore's devotion to abortion rights; Gore said he'd wrestled with whether Medicaid should fund abortions, but added he was absolutely unequivocal in his defense of abortion rights. Bradley faulted Gore for not being "consistent" on the issue. Substitute the words "pro-life" for "pro-choice," and this exchange would have fit nicely in the Republican debate an hour before.