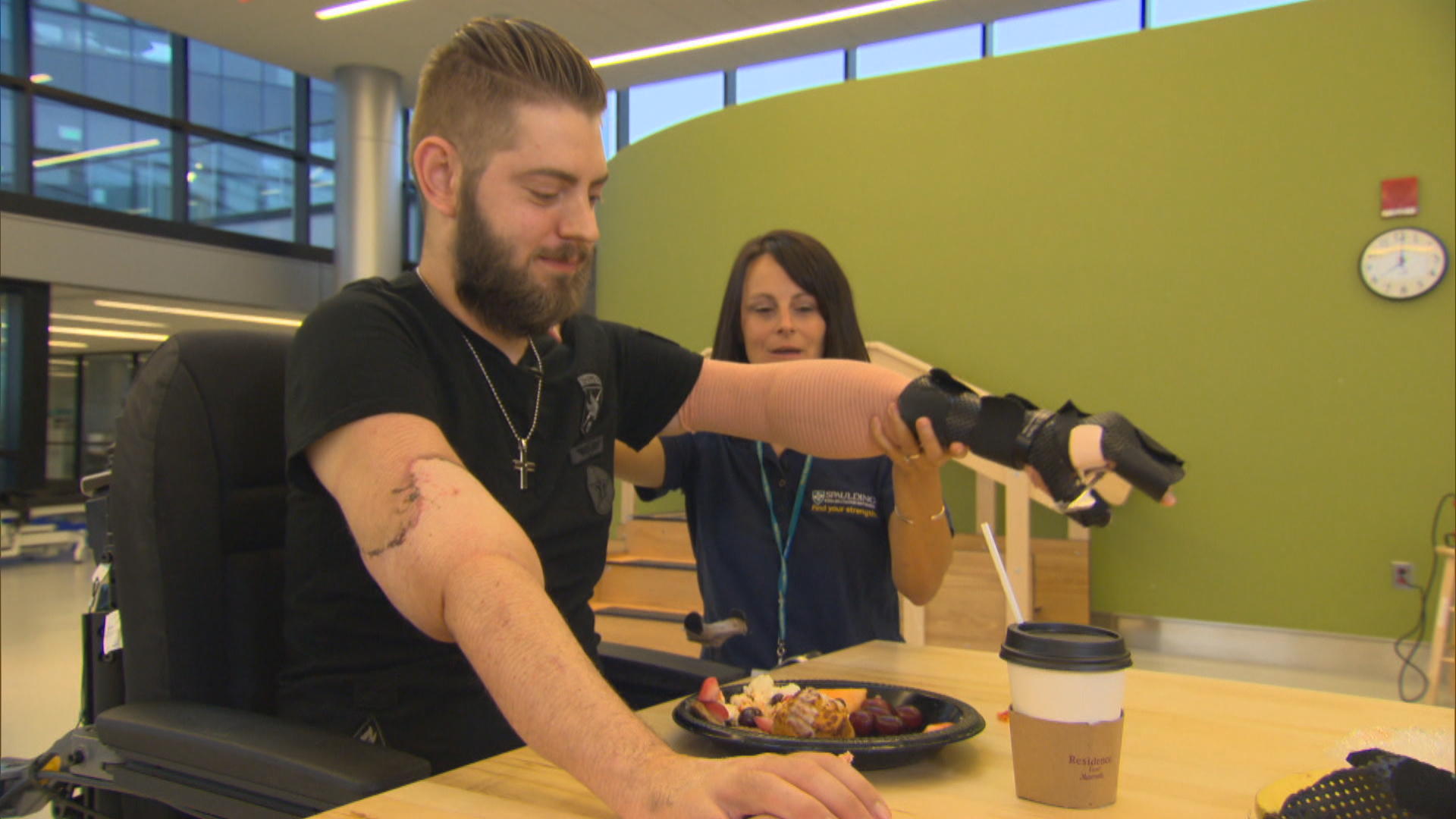 Two years ago, John Peck, a Marine who lost all four limbs to an explosion in Afghanistan in 2010, learned he might not have to rely on prosthetic arms for the rest of his life.

“This dude, Sgt. John Peck -- what, what! -- just got listed for a double arm transplant,” Peck said.

“These things, like, suck,” he had said, holding up his prosthetic hand. “I mean they are horrible.”

This summer Peck was wheeled into an operating room at Brigham and Women’s Hospital in Boston for a 14-hour surgery, reports CBS News correspondent David Martin. Packed in ice chests, arms from a young man who had been declared brain dead 36 hours earlier were rushed in to be attached to Peck’s stumps. Dr. Simon Talbot led a team of 60 surgeons, nurses and technicians.

“Is there a moment of truth in these surgeries? The moment when you know you’ve succeeded in attaching that arm?” Martin asked him.

“There’s a fabulous moment of truth. ... That’s when blood can flow into this hand and you see it turn pink. And that’s the moment where you get butterflies and you know that this arm is actually back on, back alive again,” Talbot said.

When Peck woke up the next day, he had someone else’s arms.

Before he can use them, his own nerves have to grow down to his new fingertips -- a slow and sometimes agonizing process.

“There was one night in the ICU, I was crying. I was in a lot of pain, even through all the meds I was on. I contemplated calling the doctor and being like, ‘Look, doctor, I can’t handle this pain right now. You gotta take these arms off me,’” Peck said.

He withstood the pain and is now in his second month of rehabilitation with his medical team, constantly checking for any sign that his body might be rejecting his new arms.

“Any day my body can say, nope, not having it. And then go back to Brigham and get my arms re-amputated even higher than I was before,” Peck said.

For now the arms are in braces to protect them from strain, and it could be a year before he has sensation in his fingers.

“It’s very different having to kind of relearn, right? Because you learned with the prosthetic, and you got that down, and now you’ve got these arms back and you kind of got to relearn how to use them,” Peck’s therapist said.

Two years ago, when we first met Peck, he was living in a handicap-accessible house, but just putting food on the table was an exercise in frustration.

Even with his new arms, he has to learn how to sit up all over again.

“So you’re not able to push off with your arms yet,” Martin said.

“No,” the therapist said.

“But you will be,” Martin said.

“Oh yes. As soon as those doctors give me that OK, I’ll be sitting up like a pro again,” Peck said.

Everyday tasks the rest of us take for granted are now within his reach -- thanks to the arms of a dead stranger.

“You don’t know who the donor is,” Martin said.

“But his family may be watching this. What would you like to tell the family?” Martin asked.

“I’m just grateful that I’m going to have this opportunity to be able to hold somebody’s hand again, to possibly be able to fulfill my dreams, my lifelong dream,” Peck said.

That dream, even when he had no arms, is to become a celebrity chef.

If he never recovers enough dexterity to slice and dice, Peck said, well -- then he’ll just run the place.

Sign up now to get our daily Eye Opener email! Kick off your mornings with a look at the top headlines and all that matters -- your world in 90 seconds

"Survive or be killed": Inside Chicago's gun violence epidemic
Thanks for reading CBS NEWS.
Create your free account or log in
for more features.
View CBS News In
CBS News App Open
Chrome Safari Continue
Be the first to know
Get browser notifications for breaking news, live events, and exclusive reporting.