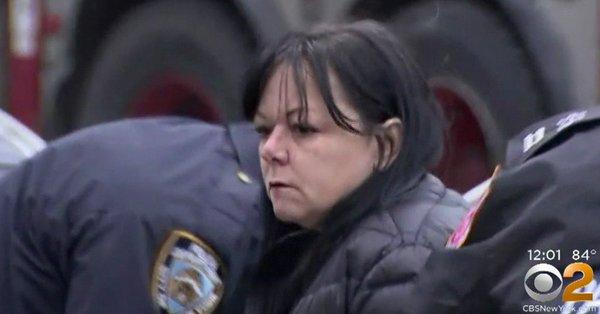 NEW YORK -- A woman who had a seizure behind the wheel of her car which then rolled into a Brooklyn crosswalk, killing the 4-year-old daughter of a Tony Award-winning actress and a 1-year-old boy, was arrested on manslaughter charges Thursday for deaths that prosecutors said should never have happened.

Just two months before the March crash, prosecutors said, a medical episode caused the woman, 44-year-old Dorothy Bruns, to drive into a parked car. She then had a seizure while hospitalized and was told by a doctor not to drive for one year -- advice that was repeated during two follow-up appointments.

Despite those instructions, Bruns was involved in a fender bender on Jan. 20 and left the scene, according to prosecutors.

And then, on March 5, Bruns suffered another seizure while stopped at a red light in Park Slope, Brooklyn. Her car rolled into the crosswalk, striking actress Ruthie Ann Blumenstein and her 4-year-old daughter, Abigail, and Lauren Lew and her 1-year-old son, Joshua. Both children were killed.

"She didn't listen, for whatever selfish reasons, and she continued to drive," prosecutor Craig Esswein said  Thursday in court. "And unfortunately, two families lost children because of the defendant's selfishness."

A defense attorney, however, disputed that, according to CBS New York.

"The defendant was given a letter by that neurologist clearing her for her regular activities," defense attorney David Jacobs said in court Thursday.

Horrifying video footage captured at the scene of the deadly crash shows the white car moving into the crosswalk as the unsuspecting pedestrians are mowed down.

Bruns was arrested Thursday at her Staten Island home. She pleaded not guilty in a Brooklyn court to charges that included manslaughter, criminally negligent homicide and reckless driving.

A call to Bruns' attorney wasn't immediately returned. She was ordered held on $75,000 bond and faces 15 years in prison if convicted on the top charge.

"Her alleged insistence on driving despite doctor's orders and serious medical conditions that prevented her from safely doing so was not only irresponsible, it was unlawful," said District Attorney Eric Gonzalez said.

First-responders to the Brooklyn crash said she was foaming at the mouth, confused and unsteady on her feet, and then suffered another seizure in the ambulance on her way to the hospital and again at the hospital, prosecutors said.

Blumenstein, who is pregnant, was hospitalized in intensive care but later said in a statement that she was healing.

"By all accounts it is a miracle our second child is unharmed," the statement read. "Please continue to pray for the Lew and Blumenstein families as we process the unthinkable."

Blumenstein, who goes by the stage name Ruthie Ann Miles, won a featured actress Tony in 2015 for her role as Lady Thiang in a revival of Rodgers and Hammerstein's "The King and I." It marked her Broadway debut. Blumenstein's other credits included "Sunday in the Park with George" opposite Jake Gyllenhaal and playing Imelda Marcos in David Byrne's off-Broadway musical "Here Lies Love." She had a recurring role on the FX series "The Americans."

The crash prompted New York Mayor Bill de Blasio to propose changes to state laws that would extend and expand speed enforcement cameras around school zones, escalate fines for repeat offenders up to $350, and strip vehicle registration for dangerous drivers. Such drivers could be people with serious medical conditions.