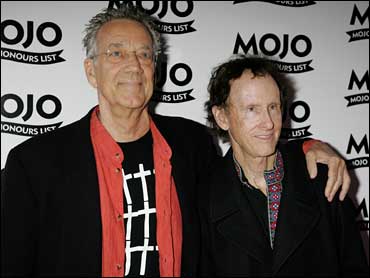 The end is near for a bitter legal dispute between the three surviving members of The Doors now that the California Supreme Court has refused to take up their case.

Keyboardist Ray Manzarek and guitarist Robby Krieger are on the hook for more than $5 million after they were found by lower courts to have improperly invoked The Doors' name and images during a 2003 concert tour. After the high court declined to hear their appeal on Aug. 13, they'll have to pay up to drummer John Densmore, the parents of the deceased lead singer Jim Morrison and the parents of Morrison's deceased wife, Pamela Courson, who died in 1974.

The case goes back to 2002, when Densmore declined an offer from the other two to go on a concert tour as The Doors. Densmore said he didn't object to Manzarek and Krieger touring and singing The Doors' songs, as long as they didn't call themselves The Doors, use the group's distinctive logo or any other Morrison-era imagery.

"You can't call yourselves The Doors because you can't have The Doors without Jim Morrison," Densmore's attorney S. Jerome Mandel said.

Densmore and the parents sued Manzarek and Krieger in 2003 after the two began touring the country with Ian Astbury, former lead singer of The Cult, and calling themselves The Doors of the 21st Century.

Densmore complained that the phrase "of the 21st Century" was often little more than fine print in advertisements and that the new band displayed Morrison's image dozens of times during concerts. The tour grossed $8 million and netted $3.2 million, which went to the new band's company called Doors Touring, Inc. and none of which went to Densmore or the parents.

In 2005, a judge ordered the new band to stop using "The Doors" in any form and ordered Manzarek and Krieger to pay Densmore and the parents a combined $3.2 million, plus $2 million in legal costs.

An appeals court upheld the $3.2 million award, and is considering Manzarek and Krieger's appeal of the $2 million in legals costs as excessive.

"It's really disappointing," said lawyer Mark Poster, who represented Manzarek and Krieger. He said the two pursued the appeal so vigorously because a judge had overruled a jury decision in awarding Densmore damages.

The dispute stems from a 1970 agreement signed by the four original band members, including Morrison, that any business deal would require an unanimous vote of The Doors. The agreement was reached after Morrison and three others got into a "violent disagreement" over using "Light my Fire" in a Buick television commercial, according to the appeals court's decision in May backing Densmore. General Motors is the maker of Buicks.

"While the three partners had agreed to the commercial, Morrison vehemently disagreed and the commercial was not done," the appeals court wrote.

Since Morrison's death in Paris in 1971, the remaining band members and the parents split Morrison's share of the still-flourishing sale of The Doors' music and memorabilia. Each partner has veto power over business deals.

Seven years ago, for instance, General Motors offered the partnership $15 million to use "Light My Fire" to sell Cadillacs, and everyone but Densmore wanted to take the deal. Densmore also refused an endorsement deal offered by iPod maker Apple.

"Morrison had been adamant against doing commercials and Densmore wanted to honor Morrison's memory," the appeals court noted in its May ruling.

The Los Angeles-based band, which was inducted in 1992 into the Rock and Roll Hall of Fame, had a string of hits in the 1960s including "Break on Through," "L.A. Woman" and "Riders on the Storm."

Manzarek and Krieger now call themselves Riders on the Storm and continue to perform The Doors' songs live.