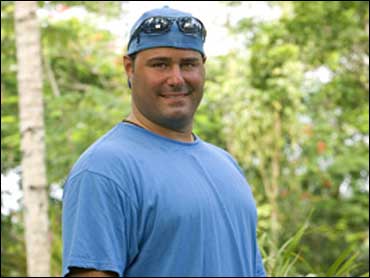 The jungle just got a lot quieter.

Judd Sergeant, the garrulous doorman from New Jersey, was banished from Guatemala, leaving just five survivors to vie for $1 million in the Mayan ruins.

It took some eleventh-hour conniving by Danni to turn the tables. The sports talk show host who admitted early on to being "ready to have my head chopped off," was spared beheading by winning immunity. With it, she earned bargaining power and the once-invincible alliance was broken again.

Danni literally bought her freedom. During the first challenge, tribe mates were given cold cash to use in a jungle auction. The items up for bid were tempting indeed: beef jerky, chocolate chip cookies, and best of all – visits from family members.

But it was a wax-sealed envelope that Danni coveted that saved her. Inside, declared host Jeff Probst, was a "hidden advantage." Indeed, the advantage allowed Danni to switch places with Stephenie during a crucial moment of "Mayan Human Tile Chess," which ultimately won her immunity.

Judd remained complacent as ever – and rightfully so. At the auction, he won the right to spend the night with his wife – and invited Stephenie and Cindy to hang with their boyfriend and sister, respectively.

Stephenie cuddled with her boyfriend, Mike. Cindy frolicked with her twin sister, Mindy. And Judd savored every moment with his wife – metaphorically.

"It's like eating 25 White Castle cheeseburgers," he said, comparing being in the Mayan jungle with his wife to spending the evening at a New Jersey drive-through.

But away from all the warm and fuzzy family reunion, Rafe, Danni and Lydia conferred.

"You can't trust a person like Judd," said Rafe, before getting profound. "But you can trust that you don't trust him."

"He's already been caught in quite a few lies," said Stephenie of Judd. (Forget the fact that just a few minutes earlier, she declared "I owe Judd big time" for allowing her to hang out with her boyfriend).

"I'm pretty happy someone's going home and as long as it ain't me, I'll have a smile on my face," said Judd at tribal council.

But the smug grin disappeared moments later when Judd received four of the six votes.

The talkative tribesman would not leave without uttering a parting shot.

"I hope you guys all get bit by a crocodile," he muttered. "Scumbags."

On The Early Show Friday morning, co-anchor Rene Syler wanted to know if Judd will speak to Stephenie at the "Survivor" reunion.

"We'll see what happens," Judd replied. "Like I said, I thought me and her were tight. Not only tight, I thought we were pretty good friends. I took her on every reward there was. She blindsided me, back-stabbed me."

But, Syler asked, "Can you honestly tell me you wouldn't have done the same thing?"

"I wouldn't have done the same thing," Judd said flatly. "Me and her were pretty close. We were a pretty close alliance. She had promised my wife she was taking me to the final two."

At least one good thing happened as a result of his time in the jungle, as he told Syler: "I lost 45 pounds, total."