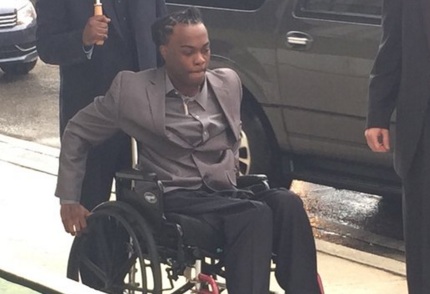 FORT LAUDERDALE, Fla. -- A man who won a $23 million lawsuit against a Florida sheriff’s office this year after being shot by a deputy and paralyzed has been arrested on charges that he sold heroin, marijuana and cocaine near a preschool.

The Palm Beach Sheriff’s Office announced the arrest of 23-year-old Dontrell Stephens on its Facebook page Thursday. The post included Stephens’ mugshot, his booking sheet and the message, “If you sell drugs near a DAY CARE CENTER you are going to get #BUSTED .”

It was the first arrest the sheriff’s office has announced on Facebook since Sept. 30 when the agency posted news of an arrest in a 1975 murder case. Spokeswoman Therese Barbera said the Facebook post “had nothing to do with who he is” but was because his arrest for selling drugs near a day care. She pointed out that the agency had not issued an announcement to the media, which it would have done if it were trying publicize his arrest.

Stephens, who is paralyzed from the waist down, won his federal lawsuit against the sheriff’s office in February but has not received any money as the verdict remains under appeal. Also, under Florida law, any lawsuit payout of more than $200,000 by a local government agency must first be approved by the Legislature.

Stephens’ attorney, Jack Scarola, found the Facebook announcement of the arrest unusual and said the agency’s refusal to pay has driven his client to the “brink of desperation.”

“And then the moment he falls off the ledge, if in fact he has fallen off the ledge, the Palm Beach Sheriff’s Office is there to catch him,” Scarola said. He said Stephens lives on a monthly Social Security disability check and the “generosity and pity of friends.”

“Just as surely as if they had planted drugs on Dontrell Stephens, he has been entrapped,” Scarola said. “There is no excuse for engaging in illegal drug trade, but any reasonable look at Dontrell’s desperate circumstances would show why he may have been led to do things he otherwise would have never done.”

Stephens was being held Thursday evening at the Palm Beach County Jail on $48,000 bail. Scarola said arrangements were being made to get him released.

Stephens, who is black, was unarmed when he was shot in September 2013 by Deputy Adams Lin.

Lin, who had stopped Stephens for riding his bicycle into traffic, testified at trial that he shot Stephens four times because he reached for his waistband with his left hand and then flashed a dark object he thought was a small handgun.

Stephens testified that he was raising his hands when Lin, who is Asian-American, opened fire for no reason. Video from the dashboard camera in Lin’s patrol car showed Stephens’ left hand was empty and a cellphone was in his right hand.

The jury deliberated for 3.5 hours before ruling for Stephens.

Earlier this week, the sheriff’s office agreed to pay $1.7 million to the family of a mentally ill 18-year-old who was fatally shot by a deputy in 2012. Michael Camberdella had dropped the hammer and hedge shears he had been holding but began throwing rocks at Deputy William Goldstein, who fired 11 shots and killed him.

Goldstein and Lin were both cleared of criminal wrongdoing and remain with the sheriff’s office.

This year, the agency has agreed to pay more than $3 million to victims or families of deputy-involved shootings, according to The Palm Beach Post. In the previous 16 years, the agency had paid $1.7 million, the newspaper found.