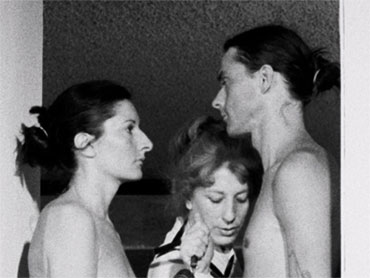 A new exhibit at The Museum of Modern Art is causing discomfort among some visitors by bringing them close to nude performers - some might say too close.

Two nude performers stand inches apart in a narrow doorway of the exhibit of work by Yugoslavian-born artist Marina Abramovic, which opened on Sunday.

The position of the naked pair, who alternate and are either opposite or same-sex performers, forces patrons to decide whether to walk between them.

To some patrons, a brush with live flesh was just too much to ponder.

Morgan Wolfe, an 18-year-old visitor to the museum, decided not to walk between two male performers.

"It bothers me a bit," he told the New York Post in Sunday editions.

The exhibit, "Marina Abramovic: The Artist is Present," presents a view of Abramovic's career over four decades and her work in a variety of mediums, including performance art, installations, sound pieces, video works and photographs.

Besides the naked pair in the doorway, the exhibit includes a nude performer lying under a skeleton and a naked woman on a bicycle seat.

Abramovic is best known for performance works in which she exposed herself to physical pain, sometimes involving audience participation.

In one of her most squirm-inducing works, she invited members of the audience to inflict pain on her with one of 72 objects, including a rose, a chain, scissors, knives, a whip and a gun.

The exhibit at the MoMA continues through May 31.