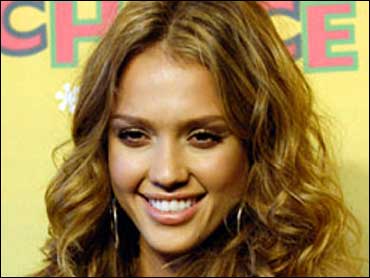 "I love challenging authority," the 26-year-old actress tells InStyle in its June issue, on newsstands Friday. "It probably wasn't easy being my parents. The second somebody says 'no' to me is the second I'm going to jump up and say 'yes!'"

Alba, whose screen credits include "Sin City" and "Into the Blue," reprises her role as Susan Storm/Invisible Woman in "Fantastic Four: Rise of the Silver Surfer," set for release June 15.

"My experience in this business is that if people think you're going to put people in seats because you have a fan base, it's more important than anything," she says.

She's finally "getting to play characters and dive into things and not just be sort of this version of 'this girl,'" says Alba, who found she was typecast as "some kind of little tart."

"Because obviously, if you have a womanly figure, you're not allowed to have a brain or any idea of the world whatsoever. You just have to be hot and use your body to get ahead."

But that body helped win her countless male fans, and, in turn, increased her value to movie producers and casting directors.

"I had womanly curves at a young age," says Alba, who starred as a mean high school student in 1999's "Never Been Kissed." "Usually kid actors are a few years older than the roles they play. I was two or three years younger."