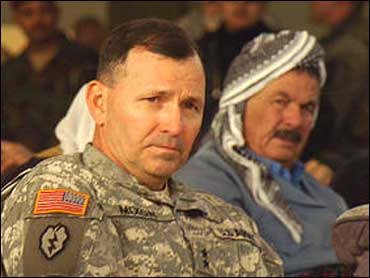 Recent statements by Army Major Gen. Benjamin Mixon about beginning to draw down U.S. troops from the northern provinces of Iraq and shifting away from direct combat missions appears to come with the hope that the end is in sight. On the surface, the idea is encouraging. The northern provinces have been the easiest to bring under control. Heavily Kurdish, their main concern is an attack from Turkey rather than the increasing violence the civil was in Iraq has caused.

Gen. Mixon indicated that by January, troop strength there could be cut by 25 percent. So should we begin to put out the welcome mats for our troops? And what will those troops remaining in northern Iraq do?

Unfortunately, we shouldn't be too hasty with the welcome mats. The troops who leave the northern provinces most likely will be redeployed in the southern and western provinces, where the issue of Iraqi government control is anything but decided. In fact, Gen. David Petraeus, the senior commander in Iraq, probably will have trouble making a case for the success of the most recent troop surge in those areas when he reports to the President in September.

It is important to remember that the troop surge was a response to increased violence in Iraq that occurred a year ago after the then-senior commander, Gen. George Casey, announced he was planning to reduce our combat brigades. The northern provinces probably will not see any internal increase in violence if we draw down our troops there. But for the moment, they represent the only area that has the potential of being self-sufficient.

Also, we should not be deceived by proposed drawdowns. Any such activity takes a very long time, but the drawdowns are a start in the right direction. The missions, focusing less on direct combat that Gen. Mixon was referring to, are training and advisory in nature, with a smattering of stability operations thrown in. Such missions can last for years before satisfactory results are achieved.

If America's patience allows for a slow and orderly withdrawal, some of our military missions in Iraq can be realized. The Iraqi military and police forces will become stronger, perhaps strong enough to maintain some kind of government stability in a country on the brink of anarchy. The question that remains now is whether we are willing to let our military involvement in Iraq last another four years or more so the gains we have made thus far can be properly preserved and even improved upon. The precipitous withdrawal of our forces envisioned by a number of members of Congress and many other Americans can lead to a disaster that may negate that idea and put Iraq on the brink of a catastrophic implosion.