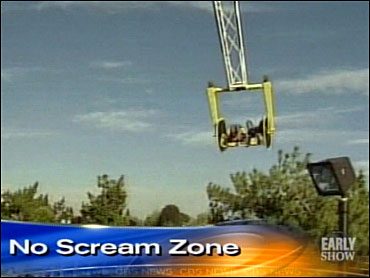 Scandia Park wasn't much more than mini-golf until The Screamer opened last month. Scandia's general manager, Steve Baddley, said that people were loudly enjoying the ride and that was trouble. The neighbors didn't appreciate the noise.

So the rule came down: No screaming on The Screamer. Ride attendants instruct riders to cover their mouths tightly if they felt the need to make noise. Passengers are, Baddley said, "still screaming on the inside." But six stories up it can be a struggle to keep screams inside.

"Don't have a ride called 'Sky Screamer' if you can't scream while you're in the air," one rider said.

To be sure, it's not a quiet neighborhood. There are eight lanes of freeway running through it.

"My complaint isn't solely based on sound," Bayless said, "I mean, this is an eyesore."

Thus, the ride has become 168 feet of silent fear.

"You're not thinking about much other than, 'Get me down and now,' " Baddley said. "It's fantastic."