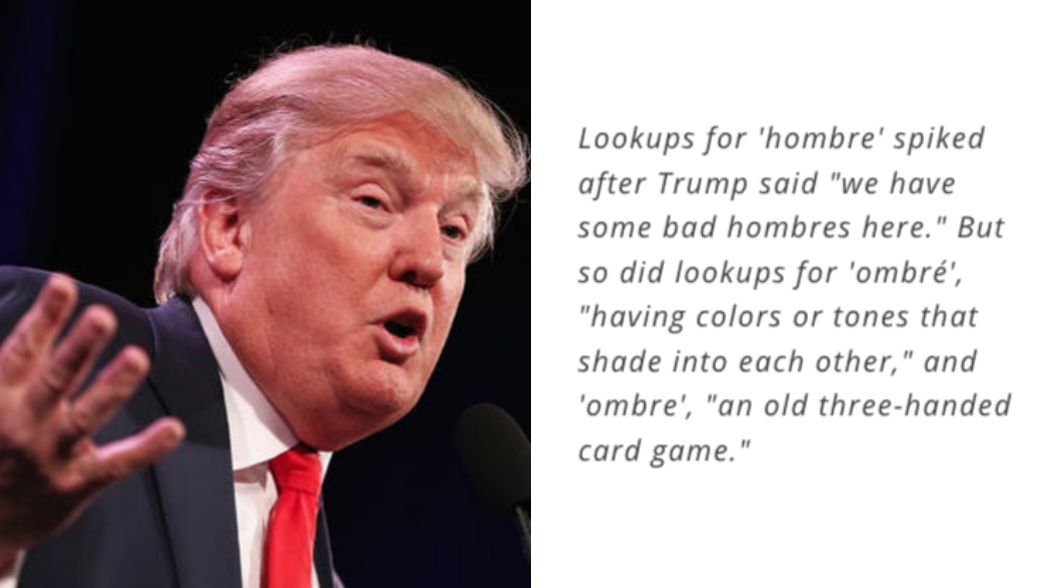 It was expected that Donald Trump would double down on his determined plan to build a wall while addressing the topic of immigration Wednesday night. But what wasn’t expected, was his comment that followed.

“We have some bad hombres here, and we’re going to get them out,” Trump promised.

Thousands of people took to Twitter to discuss Trump’s bilingual moment, and people began to ask: Who are the “bad hombres”?

Merriam-Webster was quick to jump in to define the new term Trump introduced on the debate stage.

Searches for the word “hombre,” the Spanish word for “man,” spiked 120,000% over the hourly average after Trump used the word, Merriam-Webster reported.

But that wasn’t the only word people were searching.

By the end of the debate, lookups for “hombres,” “ombré” (“an old three-handed card game popular in Europe especially in the 17th and 18th centuries”) and “ombre” “having colors or tones that shade into each other —used especially of fabrics in which the color is graduated from light to dark”) also increased by large margins, Merriam-Webster said.

It’s not surprising, considering dozens of people were using the term “ombre” to make jokes during the debate on Twitter.

Even celebrities chimed in: