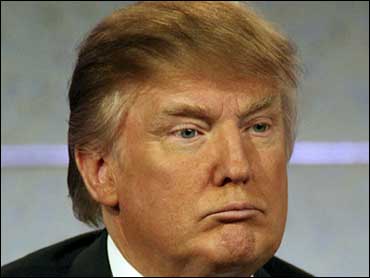 Donald Trump has exchanged insults with Rosie O'Donnell and questions Elisabeth Hasselbeck's intelligence. So which co-host does he back in their recent on-air tiff on ABC's "The View"?

"I've always said Rosie is very self-destructive," Trump said Thursday in Chicago. "... As far as Elisabeth Hasselbeck, I've always said she's probably the dumbest person on television, but when she called me ... obnoxious, she was probably right."

The argument Wednesday included O'Donnell calling Hasselbeck "cowardly" for not defending her when media outlets suggested that she'd called U.S. troops "terrorists" during a previous debate.

"What you did was not defend me. ... I asked you if you believed what the Republican pundits were saying — you said nothing, and that's cowardly," O'Donnell said.

Hasselbeck responded: "Do not call me a coward, because No. 1, I sit here every single day, open my heart and tell people what I believe."

Trump, who started trading barbs with O'Donnell about six months ago, said he doesn't watch the ABC daytime talk show — then got in another O'Donnell dig.

"Rosie wears thin. Rosie will go on to another show, and like her first show, it'll fail," he said.

Trump was in Chicago to drum up sales for his towering condo-hotel project, under construction along the Chicago River.