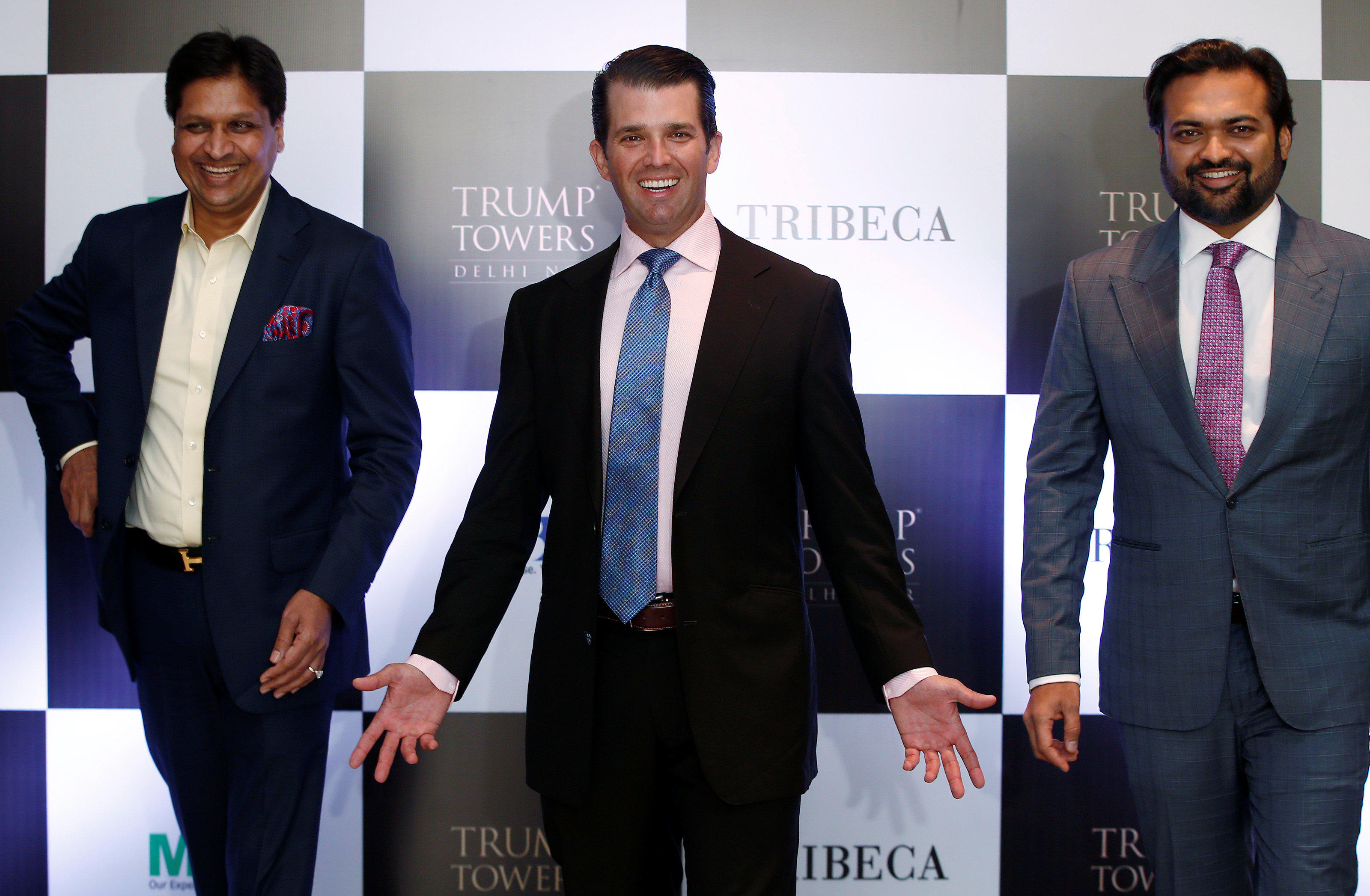 NEW DELHI -- The U.S. president's son heaped praise on the Indian media and complained of coverage at home, as he neared the end of a whirlwind trip across India promoting Trump-brand luxury real estate. Donald Trump Jr. said at an Indian business summit Friday that life since his father's election "has been difficult from a family standpoint," but that he'd enjoyed the coverage he'd received during this trip.

"I love the Indian media. They are so mild and nice," he said to audience laughter, describing how he felt his comments have at times been twisted by some U.S. news outlets. Even when Indian outlets are aggressive in their coverage: "They've at least been fair," he said.

Trump has met only with Indian reporters carefully selected by his team, and the media coverage of his visit often focused on the promised luxury of the real estate developments he is selling.

With summer already approaching, New Delhi is far too warm for cozy fires, but flames flickered on a video screen behind Trump Jr. as he was interviewed by a TV anchor with the channel co-hosting the Global Business Summit.

His speech was retitled by conference organizers only hours before it was delivered amid criticism he was pushing an ethics boundary by talking about foreign policy during a private trip focused on the family business. Very quickly, "Reshaping Indo-Pacific Ties: The Era of Cooperation" became "A Fireside Chat with Donald Trump Jr. "

Critics had said an international relations speech, especially while sharing a platform with Indian government officials, including Prime Minister Narendra Modi, was problematic because of the implication that he has his father's ear.

"I am concerned that Mr. Trump's speech will send the mistaken message that he is speaking on behalf of the president, the administration or the United States government, not as a private individual, or that he is communicating official American policy," Sen. Robert Menendez, ranking Democrat on the Senate Foreign Relations Committee, said in a letter earlier this week to the U.S. Embassy in New Delhi.

Menendez said he expected the U.S. State Department and the embassy would treat Trump Jr. like any other American on private business.

On Thursday, White House spokeswoman Lindsay E. Walters said the Trump administration "takes seriously its obligation to ensure that government resources are not used to provide a private benefit to anyone."

The State Department and the White House have said the only support that was given for the trip was related to Secret Service protection for Trump Jr.

President Trump has pledged to stay away from any new foreign business deals during his term in office to avoid potential ethical conflicts. While the projects that Trump Jr. is promoting in India were inked before his father was elected, ethics experts have long seen the use of the Trump name to promote even existing business ventures as tricky territory.

Trump Jr. and his brother Eric have been running the Trump Organization, the family's real estate business, during their father's presidency.

Since Tuesday, Trump Jr. has been traveling to four Indian cities to meet business partners and buyers in the luxury residential projects that bear his family's name.

With five ventures under the Trump brand, India has the company's largest number of projects outside the United States. The Trump Organization charges a licensing fee to its Indian partners who build the properties under the Trump name. A luxury complex is already open in the central city of Pune while the others are in varying stages of construction in Mumbai and Kolkata and two in the New Delhi suburb of Gurgaon.

Speaking to an Indian TV station during his visit, Trump Jr. dismissed as "nonsense" claims that his family business is benefiting from his father's presidency and that critics forget the opportunities lost and don't give the family credit for doing the right thing.