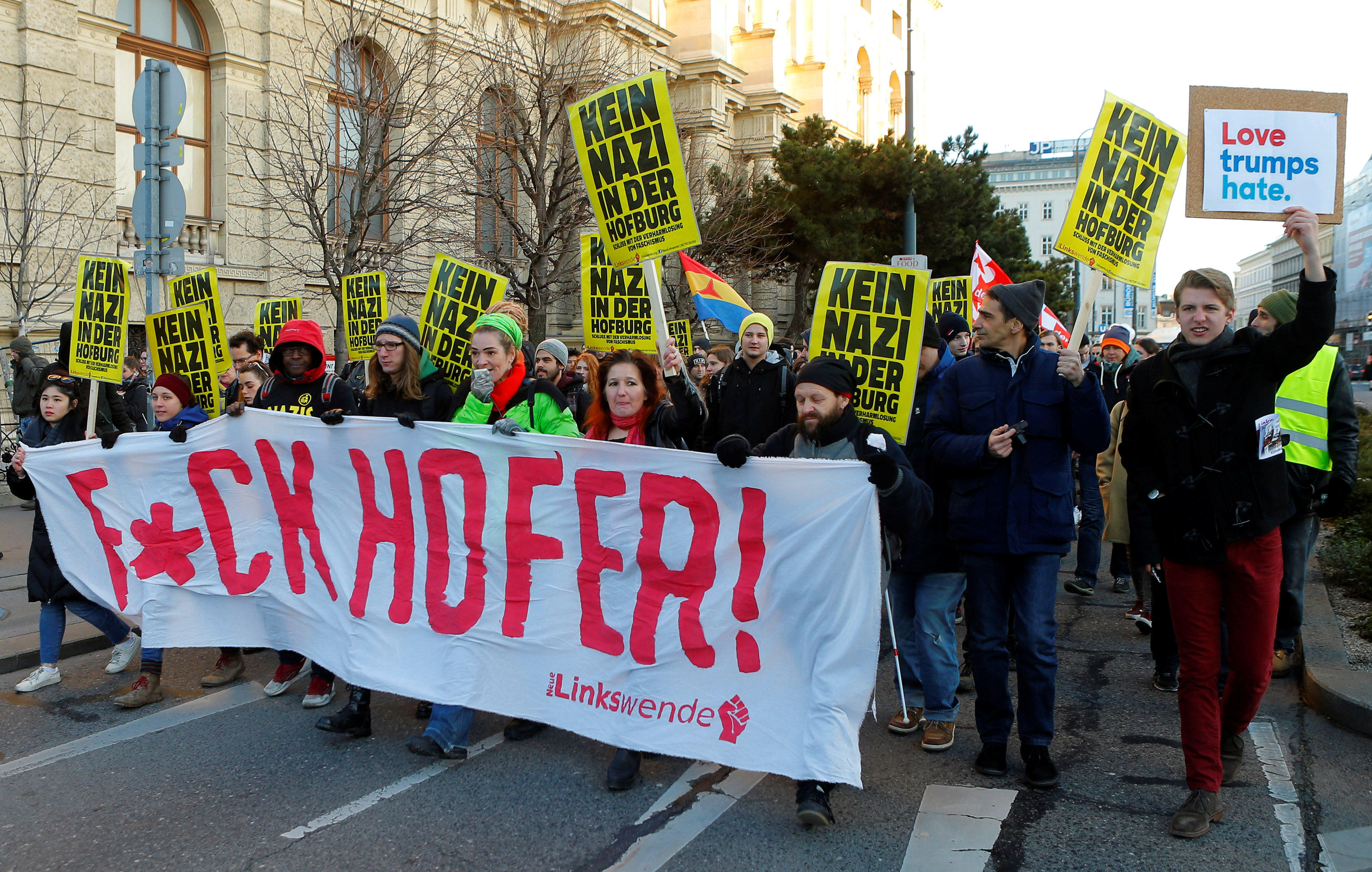 VIENNA -- In the wake of the Brexit vote in the United Kingdom and Donald Trump’s victory in the United States, far-right parties across Europe are eyeing other countries on the map where their newly energized movement could win at the ballot box.

Austria, which holds its presidential election Sunday, is among the first to test the staying power of right-wing populism in Europe: if polls here are right, the country is poised to elect Europe’s first far-right head of state since World War II.

The results could have far-reaching implications for politics beyond Austria’s borders – and signal further far-right victories in a half-dozen countries with elections slated for 2017.

Norbert Hofer, the 45-year-old candidate for the far-right Austrian Freedom Party, holds a narrow but consistent lead in the polls over Green Party candidate Alexander Van der Bellen heading into the final stretch.

Hofer has much in common with other far-right leaders across Europe, like Marine Le Pen in France and Geert Wilders in the Netherlands: Campaigning on a platform of “putting Austria first,” he is staunchly anti-refugee, has said he favors a referendum vote on European Union membership and claimed Islam “has no place in Austria.”

Still, for his part, Hofer has repeatedly rejected the label of “far-right,” working to assure voters and journalists alike that he is not what his opponents make him out to be.

Asked by a journalist after his final rally in Vienna whether Europe should “fear” him as president, Hofer said no. “I am just a normal guy,” he said. “I am not far-right.”

Van der Bellen, meanwhile, said Mr. Trump’s election in the U.S. is a “wake-up call” for Austria and its European neighbors, calling for European countries to band together – and suggesting Austria could help trigger far-right victories elsewhere if voters don’t reject Hofer.

Sunday’s election follows more than six months of uncertainty over who would next lead Austria: Hofer and Van der Bellen initially faced off last May in a second-round vote that was supposed to determine the next president.

Van der Bellen won that contest narrowly, by just 31,000 votes -- however, Austria’s constitutional court annulled the results after evidence of voting irregularities and called for a revote. The new election was then scheduled for early October, but an issue with the glue on Austria’s ballots forced Austrian officials to push the election date back to December.

As Europe heads into 2017, Austria is just the beginning when it comes to the potential for far-right political gains at the ballot box. In March, the Netherlands votes in parliamentary elections, where Dutch Freedom Party leader Wilders has a chance at becoming the next prime minister. Then France votes for its next president in April and May, with the National Front’s Le Pen poised to make it to the final round against Republican candidate Francois Fillon.

And in neighboring Germany, which votes next fall, Chancellor Angela Merkel is facing strong backlash to her policy on admitting refugees to Germany. The far-right Alternative fur Deutschland (AfD) has worked to capitalize on anti-refugee sentiment in the country, and its victories in several state elections over the course of 2016 means the party is likely to win seats in the German parliament.

Both candidates held final rallies in Vienna on Friday, making their final pitch to voters. Hofer, who spoke at Vienna’s old stock exchange Friday morning, framed the election as an opportunity to revitalize Austria. His message has been compared to that of Mr. Trump, who promised to “Make America Great Again;” Hofer wants Austrians to be “proud again.”

“Austrian men and Austrian women have a strong will to succeed – to make this country a success,” he said. “The old dust has to be shaken off and we will be proud again to be Austrian.”

And Van der Bellen urged voters to work within the existing system to change things, rather than give in to a desire to “destroy things.”

“We know that things need to change – but let’s not destroy things,” he said. “…You don’t need to demolish the house because a couple of windows have become loose.”

In Vienna on Saturday, just one day before Election Day here, things were mostly quiet on the political front: Van der Bellen volunteers handed out flyers and bags of Van der Bellen-branded fruit snacks Saturday evening in front of the city’s famous Christmas market at the Rathaus (city hall). Earlier in the day, an anti-Hofer group staged a small march through part of the city, chanting, “Anti-fascist!” and “Down with the Freedom Party!”

Many of the protesters in the march – which were not affiliated with Van der Bellen’s campaign – held signs that read, “No Nazis in the Hofburg,” referring to the residence of the president. One protester held up a Hillary Clinton campaign sign saying, “Love trumps hate,” one of the campaign’s most-used phrases this year.

Michael Sumasgutner, a 21-year-old who recently switched his support to Van der Bellen after voting previously for Hofer, said membership in the EU is one of the most important issues to him – and that Hofer’s position on the issue was a big part of the reason he changed his mind.

“I think it’s important Austria stays in the EU because it’s a good connection,” he said.

Still, he said, he understands the underlying frustration with the status quo that has drawn many Austrians -- including young voters -- to Hofer and his message of change and prosperity.

“There are many problems in this country: like there are no jobs, the economy is not growing, issues of culture,” he said. He added that many voters feel that “the other parties are not working on the issues enough -- people are more attracted by the Freedom Party and want someone else in charge.”

Indeed, Sunday’s result will be historic on that front: it will be the first time in more than half a decade that the presidency is not held by a member of the center-right party (the Austrian People’s Party) or the center-left party (the Social Democrats).

Hofer’s supporters praised him as a defender of Austria and its national identity, saying he will bring the needed change to the country.

“I think he’s the better president for us – he’s for Austrians,” said Manfred Dvorak, 54, of Vienna. He added that using the “Nazi” label for Hofer, as the candidate’s opponents have done, is “stupid.”

“When people run out of arguments, then there’s always this Nazi [accusation],” he said.

David Heuser, 25, marched Saturday with the anti-Hofer crowd -- but said he ultimately believes Hofer will win the election.

“I fear that [Van der Bellen] will lose tomorrow … and that the right wing candidate will win,” he said. “If he does, we will protest against him.”