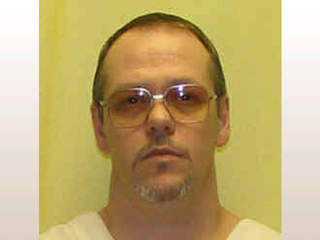 (AP) LUCASVILLE, Ohio - An Ohio death-row inmate, Donald Palmer, used his last words to profusely apologize to the families of the two victims he killed 23 years ago, before he was executed by lethal injection on Wednesday.

"I want you to know I've carried you in my heart for years and years," Palmer told six women in the room who are the widows, daughters and a niece of the men he killed. "I'm so sorry for what I took from you ... I hope your pain and hurt die with me today."

Palmer also told the women that he wished his execution could bring their loved ones back, and that he knows the pain of losing a parent, sibling and child.

Palmer, who was executed at a state prison in Lucasville in southern Ohio, was convicted of aggravated murder on May 8, 1989 for shooting and killing two strangers, Charles Sponhaltz and Steven Vargo, along a country road in Ohio.

Palmer and a friend had been staking out the home of a man who once dated his ex-wife when Sponhaltz rear-ended his truck and was shot, court records read. Vargo was a passing driver who witnessed Sponhaltz's killing and was also shot.

Daughters and widows of the victims spoke with reporters after the execution.

"When you murder somebody, what good is an apology?" said Tiffany Nameth, Sponhaltz's widow. "You don't go out and murder two people and expect to get sympathy. In my eyes, he didn't deserve any sympathy."

Palmer's lawyer, David Stebbins, who also witnessed the execution, said that the state followed its execution procedure to the letter and that Palmer truly was remorseful for the pain he had caused and thought that it was time that his execution move forward.

Also present was Palmer's grown daughter and son, his ex-wife, and spiritual advisers. The prison warden declared his time of death as 10:35 a.m.