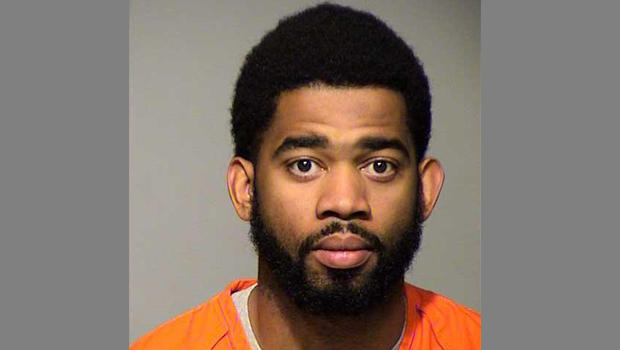 MILWAUKEE -- A Milwaukee police officer who fatally shot a black man in August, sparking several nights of unrest, has been charged with sexually assaulting a man the night after the shooting, after they watched coverage of the riots on television at a bar, authorities said Thursday.

Officer Dominique Heaggan-Brown, 24, was arrested Wednesday. The alleged victim, unidentified in a criminal complaint, told police on Aug. 15 that Heaggan-Brown had sexually assaulted him while off duty.

Heaggan-Brown fatally shot 23-year-old Sylville Smith on Aug. 13. Police said he was holding a gun when he was shot after a brief chase.

Police said Heaggan-Brown is suspended and in custody, and they have launched an internal investigation. Chief Edward Flynn scheduled a news conference for 3:30 p.m. Thursday.

According to the criminal complaint, Heaggan-Brown took the victim to Saint Joseph’s Hospital on August 15 at 4:20 AM, reports CBS affiliate WDJT.

He told a security officer the victim had too much to drink.

The security officer recognized the defendant as a Milwaukee Police Officer.

According to the complaint, the victim met the defendant through Facebook.

He was looking for another musician to help and the defendant was a rapper.

They met at a bar.

According to the complaint, the defendant and the victim watched television coverage of the protests in the Sherman Park.

The defendant bragged about being able to do whatever the defendant wanted without repercussions.

The victim said he struggled to breathe and cried as Heaggan-Brown raped him.

Heaggan-Brown allegedly undressed the victim and repeatedly told him to get on the bed.

The victim said no.

On the defendant’s phone was allegedly a video of sexual act.

In addition on the cell phone, there was evidence the defendant attempted to pay money in exchange for sex with a person identified as second victim.

According to the complaint, the police identified another man in December of 2015. The man had text messages with the defendant discussing paying for sex. The man said he was propositioned 8 to 9 times but never had sex.

Another man said he met the defendant in July of 2016, they both attended a party. Allegedly the defendant became “touchy.” The man recalled drinking a lot and not feeling normal. Then in August the defendant sent a text message requesting nude photos. The man went to Heaggan-Brown’s home and had sex in exchange for money. In total he paid for sex allegedly three to four times.

Another man said he went out to a strip club on July 30 with the defendant. He was intoxicated and recalled waking up the next morning in the defendant’s residence.  After he left the defendant’s house, he received a text that nothing had happened. The defendant told the man he was throwing up and removed his clothes because of that.

The police showed the man a photo from the defendant’s phone naked with a man and having sexual contact. The man said he did not give consent to that.

“The Milwaukee Police Association is proud to represent 1600 truly professional officers.  In any large organization there may be a time that one, or a few discredit the overall; this is by no means reflective of the overwhelming majority of good officers.  The MPA condemns all criminal behavior by any member of society, whether part of this organization or not – in all situations it is imperative that fact(s) are allowed to dictate the outcome,” said Mike Crivello, President, Milwaukee Police Association, in a statement.

Heaggan-Brown joined the police department in July 2010 as an aide. Like Smith, the man who was fatally shot, Heaggan-Brown is black. He was assigned to patrol the city’s heavily minority north side.

Flynn has said that Smith was fleeing from a traffic stop when he was shot. Heaggan-Brown’s body camera showed that Smith was shot after he turned toward an officer with a gun in his hand, according to investigators.

The Wisconsin Department of Justice investigated Smith’s death and has turned the case over to Milwaukee County District Attorney John Chisholm for a charging decision. It’s not clear when a decision in that case will be made.