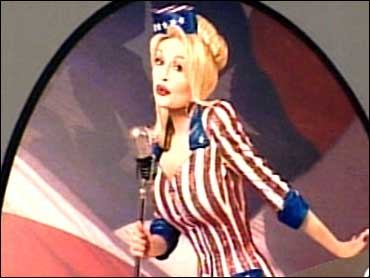 Singer-songwriter Dolly Parton's military efforts were recognized Friday morning when her image was unveiled on one of the aircraft of the 134th Air Fueling Wing of the Air National Guard out of Knoxville, Tenn.

Parton's likeness on the nose of air refueling aircraft, which also carries the name "Miss Dolly," is an unusual honor.

It has not been used with regularity since the 1940s; many people will remember such likenesses of Betty Grable and the Memphis Belle.

Parton says, "I felt like those gals in World War II and I thought, 'This is something,' and it was a greet honor and I am truly very proud, proud of it."

The aircraft is a KC135 Strato Tanker air refueling aircraft. It flies all over the world and refuels Army aircraft carriers, bombers and support fighters.

"Well, we have had me just about everywhere, but never anything this fun or big," said Parton. "I am an all-American girl and I love America and just to be part of any of this is a great honor for me, so thanks again, all you guys. And I appreciate it."

Parton's last CD was "For God and Country," a collection of new and old patriotic songs Her next tour, called the "Hello, I'm Dolly Tour," will begin Oct. 14 in Greenville, S.C.