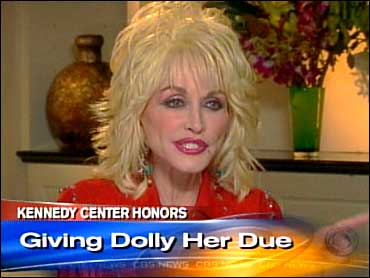 With a personality as powerful as her voice, Dolly Parton brings the sounds of country music to the world. With thousands of songs to her name and scores of hits among them, she's had an indelible impact on American music, and this year was named a Kennedy Center honoree.

She was the fourth of 12 children, growing up dirt poor in the mountains of Tennessee.

"My mother's people are very musical," she told The Early Show co-anchor Julie Chen. "So I came by the gift of music naturally. But I've always said I had more guts than I had talent. But I had enough talent to back it up."

By age 10, Parton was performing on local radio shows and early on, she developed her sexy, made-up look.

"My dad hated for me to wear makeup," she said. "But he was always just afraid, though, I think, that men would lust after me, or I could get myself in trouble. … I would use medicine. We had merthiolate and mercurochrome, or whatever that, what they call, it's that stuff that would stain and that you put on sores. But I used to put it on my lips. That way, Daddy couldn't wipe it off."

Nothing could hold Parton back. She graduated high school on a Friday and hit Nashville on Saturday. In 1967, she had her first hit, "Dumb Blonde." Soon she was starring on television's "Porter Wagoner Show." Even that stage wasn't big enough to hold her, and once she was on her own, Parton wrote songs that captured the heart of the nation and the world.

"I do write somethin' every day," Parton said. "In fact, I was puttin' on my makeup this mornin', and I was writin' this song; just came out of nowhere."

Apart from her talent, she's also known for her signature look, which she describes as a "country girl's idea of glamour."

"Well, cheap lookin', flashy lookin'," she said. "This is a true story, that I kind of patterned myself after what they called the town tramp in my hometown, when I was little. There was this woman that was very much a loose woman. But I didn't know what that meant, and I just told her how beautiful she was, 'cause she had this beautiful yellow hair. She left a big impression on me, and I would talk about how beautiful she was and different ones would say, 'Oh, she's just trash.' And I thought, 'That's what I want to be when I grow up. I'm gonna be trash!' And that is how I look."

Part of Parton's image extends to Tennesse's largest attraction, the Dolly Parton theme park, Dollywood. She is also involved in charitable causes such as the Imagination Library, which provides books to young children.

"One of the reasons I started that program, was because a lot of my own relatives — my own father, who's dead now, and I miss him every day, but he, he couldn't read and write. And my dad, though, was one of the smartest people I've ever known. ... He got to see the Imagination Library come, you know, to — to be, and all the good things happening. And he was more proud of that than anything else I had done. And he loved that. He loved that the kids call me, 'the Book Lady.'"

Parton is a prolific songwriter, and says her favorite song is "Mine is The Coat of Many Colors," which she says is more than a song to her, it's tribute to the way she was raised. The song was performed by Shania Twain and Alison Kraus at The Kennedy Center Honors.