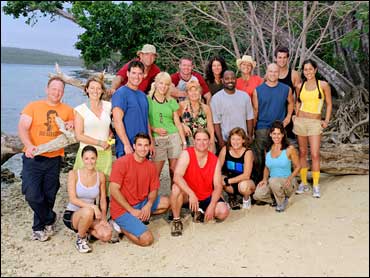 This analysis of "Survivor: Vanuatu"'s latest episode is by columnist Greg Feltes of CBS station WBBM in Chicago, who offers weekly commentary on the popular reality TV show.

Here's why Dolly Neely is the second to be booted from "Survivor: Vanuatu": She announced her intentions publicly.

There is nothing wrong with straddling the fence. In fact, it's smart play, especially early on in the game. However, it is pure idiocy to tell your competitors exactly where you stand so cavalierly. Doing so allows your opponents to plan for every possible scenario and adapt to any possible mood shifts that become apparent before tribal council.

Announcing your status also reeks of arrogance, which young people don't wear particularly well in a game for a million dollars.

She also didn't make a decision soon enough. Again, there is nothing wrong with straddling the fence. However, you can only do so for so long before people start panicking. It looked as if Dolly hadn't locked her decision in until just before tribal council, which is a tragic mistake. If she could have made her decision even a few more hours earlier, she could have used the remaining time to reassure her alliance that she was with them.

You can't please everyone in this game. Your goal should be to please as many people as possible before you cut their throats.

She made some incorrect assumptions. It probably never crossed Dolly's mind that Eliza would talk with Leann and vice versa. This proved fatal as this unexpected communication got Eliza thinking about her own safety instead of the security of her alliance.

She made plans to get rid of a member and alliance several days before it would be necessary.

This was a classic case of counting chickens before they hatched. Things change so quickly in this game; long-term planning is always something that should be in the back of your mind, but it shouldn't control your immediate actions. There was no need for Dolly to articulate the idea of getting rid of Eliza when she had several available targets that were outside of her alliance ready to be picked off.

For example, Richard Hatch took out the entire opposing tribe in season one before he even considered voting out Sean and Kelly.

It was quite odd that he was so out of the loop with both alliances last tribal council. This lack of communication or execution has yet to be explained. Was it a message or misdirection vote? Is he with the youngsters or the elders?

It seems he is with the youngsters, as Chad, Chris, Lea, Rory and Travis look rock solid. It is highly unlikely that he can pick off two of them to join him, John K. and John P. in an alliance. His best bet is to try and become the sixth wheel in the hopes that there is an early merge or mix-up.