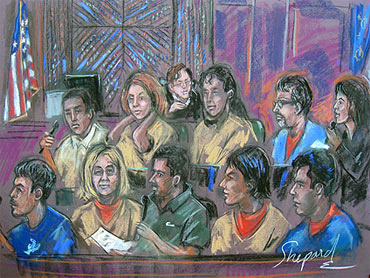 The Russian government will release four people accused of betraying Russia to the West, the Justice Department said in a letter Thursday outlining the international spy swap.

"The key provision of the United States-Russia agreement is that the Russian Federation has agreed to release four individuals who are incarcerated in Russia for alleged contact with Western intelligence agencies," said the letter to U.S. District Judge Kimba Wood in New York.

On the U.S. end of the spy swap, Wood ordered 10 defendants who admitted acting as Russian spies deported from the United States.

The letter did not name the four, describing three of them as having been "convicted of treason in the form of espionage on behalf of a foreign power" and serving lengthy prison terms.

The family members of the four will leave with them for resettlement.

Three of the four were accused by Russia of contacting Western intelligence agencies while they were working for the Russian or Soviet government, the letter stated.

"This case is the result of a multi-year investigation conducted by the Department of Justice. The network of unlawful agents operating inside the United States has been dismantled. A determination to seek a rapid and comprehensive solution was made on national security and humanitarian grounds. No significant national security benefit would be gained from the prolonged incarceration in the United States of these 10 unlawful agents. The United States took advantage of the opportunity presented to secure the release of four individuals serving lengthy prison terms in Russia, several of whom were in poor health."

The arrests of the alleged spies in the United States occurred more than a week ago, capping a decade-plus investigation of people who seemed to have embedded themselves in the fabric of American life. Authorities said they were reporting what they learned in the U.S. to Russian officials.

In Moscow, his lawyer, Anna Stavitskaya, said a journalist called Igor Sutyagin's family to inform them that Sutyagin was seen walking off a plane in Vienna on Thursday. However, she told the AP she couldn't get confirmation of that claim from Russian authorities.

Prosecutors released a copy of the indictment as federal judges in Boston and Alexandria, Va., signed orders directing that five defendants arrested in Massachusetts and Virginia be transferred to New York. All were charged in Manhattan.

All of the accused were in U.S. custody except for a man identified as Christopher R. Metsos, who is charged with being the spy ring's paymaster. Metsos, traveling on a forged Canadian passport, jumped bail last week after being arrested in Cyprus.

Sutyagin, who worked as an arms control and military analyst at the Moscow-based U.S.A. and Canada Institute, a think tank, was arrested in 1999 and convicted in 2004 on charges of passing information on nuclear submarines and other weapons to a British company that investigators claimed was a CIA cover. Sutyagin has all along denied that he was spying, saying the information he provided was available from open sources.

His case was one of several incidents of Russian academics and scientists being targeted by Russia's Federal Security Service and accused of misusing classified information, revealing state secrets or, in some cases, espionage.

Alexander Zaporozhsky, a former colonel in the Russian Foreign Intelligence Service, sentenced in 2003 to 18 years in prison for espionage on behalf of the United States. Zaporozhsky quit the service in 1997 and settled in the United States; Russia enticed him back and arrested him in 2001. He was convicted on charges of passing secret information about Russian agents working under cover in the United States and about American sources working for Russian intelligence. The U.S. global intelligence company, Stratfor, said that Zaporozhsky was rumored to have passed information leading to the capture of Robert Hanssen and Aldrich Ames, both extremely valuable double agents in the U.S. intelligence services.

Sergei Skripal, a former colonel in the Russian military intelligence, was found guilty of passing state secrets to Britain and sentenced to 13 years in prison in 2006. He was accused of revealing the names of several dozen Russian agents working in Europe.

Igor Sutyagin, a military analyst with the U.S.A. and Canada Institute, a respected Moscow-based think-tank, was sentenced to 15 years in 2004 on charges of passing information on nuclear submarines and other weapons to a British company that Russia claimed was a CIA cover. Sutyagin has insisted on his innocence, saying the information he provided was available from open sources.

Gennady Vasilenko. Vasilenko, a former KGB officer employed as a security officer by Russia's NTV television was arrested in 2005. In 2006 he was sentenced to three years in prison on murky charges of illegal weapons possession and resistance to authorities. Reasons for his involvement in the swap weren't immediately clear.