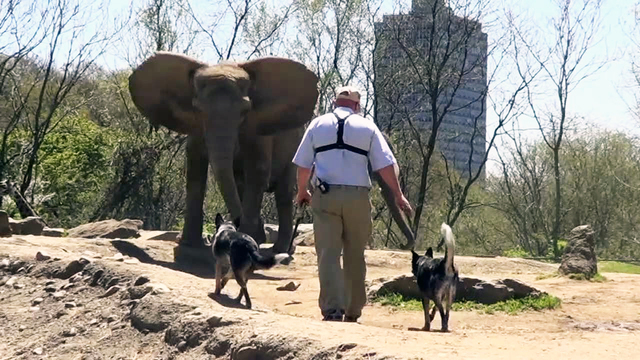 PITTSBURGH - What makes a gigantic African elephant tuck its tail and run?

A pair of 25-pound dogs at the Pittsburgh Zoo & PPG Aquarium, as CBS Pittsburgh reports.

"It was a safety issue initially around some dangerous animals and the dogs just kind of fit right into there," said Willie Theisen, the elephant manager at the Pittsburgh Zoo. "They were an extra piece to the puzzle and helped out immensely."

Two Australian cattle dogs -- Major and Zeta -- give the staff at the Pittsburgh Zoo a buffer zone when dealing with enormous pachyderms.

The dogs are bred to move livestock. In this case, the fearless canines are trained to handle massive elephants. They charge and nip at the elephants' feet and trunks. The elephants have such respect for the dogs that even if they hear a handler say the name Major or Zeta, they take notice.

They are very alert when they hear the jingling of the dogs' licenses as they come running around the corner.

Yet minutes after moving elephants around the yard or the barn at the zoo, the brother-sister tag team of dogs melts the hearts of children at the zoo.

"These dogs are actually love dogs. They would be would be great family dogs because when they are not working, they will go out, interact with the public. They love just being petted, and I mean, they are in heaven," Theisen said.

When it is time to go to work, the dogs are all business. The Australian cattle dogs weigh between 25 and 30 pounds. It's hard to believe something so small can get an elephant to do what it wants, yet every day, Major and Zeta do their job.

Few facilities in the world are using dogs to help zookeepers handle elephants. Pittsburgh is one of the only ones in the Northern Hemisphere using dogs.

"Other than the institute in Canada, I think we are one of the very few zoos that actually use them around the elephants," Theisen said.

One of Theisen's friends handles elephants at the African Lion Safari in Cambridge, Ontario. Major and Zeta were trained there to work with elephants.

Now, other zoos come to Pittsburgh to watch and learn. Time after time, Theisen says, they can't believe the power of these pooches.

Elephant attacks are not uncommon. Keeper Mike Gatti was killed by a female elephant named M at the Pittsburgh Zoo in 2002.

"These big elephants, in some of the places that have more dangerous animals even in a protected contact, these guys (dogs Major and Zeta) are invaluable to have around," Theisen said.

CBS Pittsburgh's cameras were able to see how differently the elephants act when the dogs are not around.

When Theisen walked into the yard without the dogs, the elephants walked up to him, nuzzling him with their trunks. He looked like a very small member of their herd. One of the baby elephants lay down on the ground beside Theisen and rolled over onto her back as he patted the baby's belly.

Yet, when Theisen goes into the yard with the dogs, the elephants stay at least 25 to 30 yards away. When he and the dogs walked toward the elephants, they moved in the opposite direction. The only way Theisen could get close to the elephants was to tell the dogs to "stay" and walk up to the herd by himself.

That extra layer of security is invaluable to keepers, who spend their career working with the elephants.

"It's kind of like having a second set of eyes," Theisen said. "Again, by watching the elephants, you can see they (the elephants) are more keyed on the dogs than they are on us."

As helpful as the dogs are to the staff, they also have become part of their zoo family.

Theisen says the dogs get such pleasure and joy out of working with the elephants and doing their job every day.