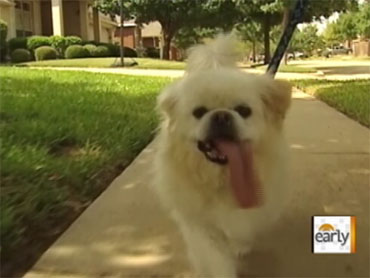 Puggy the Pekinese has a true claim to fame.

The tiny Pooch has a tongue that's anything but - it's four-and-a-half inches long - good enough to earn him the new Guinness world record for lengthy doggie tongues!

Puggy, 10, lives in Fort Worth with his owner, Becky Stanford, reports Melissa Newton of CBS station KTVT in Dallas.

Stanford says, "A lot of people will come up and ask. 'What happened to his tongue? How does he eat?"'

She says people often do a double-take when they see Puggy walk by but, "It makes me feel good that he can bring a smile to someone's face. That, in itself, brings me so much joy!"

But the new world record holder had a rough start.

Stanford says Puggy was abandoned as a puppy -- possibly because of his strange look - the same one now putting him in a positive light - and world spotlight!

And, while others may find it funny-looking or even freakish, Stanford says -- to her, Puggy's tongue is perfect. "I never thought for once his tongue was ugly," she says. "It was always just - it just added to his character! … He's a silly cartoon-looking dog; that's why I love him."