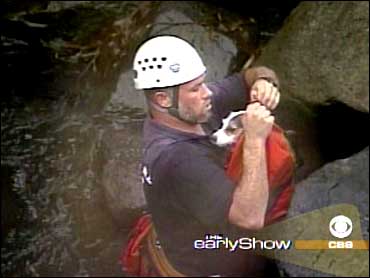 "Heidi" the dog learned the hard way Sunday that chasing birds along San Diego's Sunset Cliffs can be hazardous to your health.

A bird flew over the cliffs and so did Heidi. She ended up on the rocks below.

rescue operation (video)
using a crane. A rescuer was lowered to Heidi, then he hoisted the bewildered pup to safety.

Later, the rescuer said, "She wanted out of there but he didn't know how to let me help her get out of there."

Heidi appeared to be OK as she was handed to her owners. She wagged her tail and shook a little, but otherwise seemed unhurt, though a little wiser.