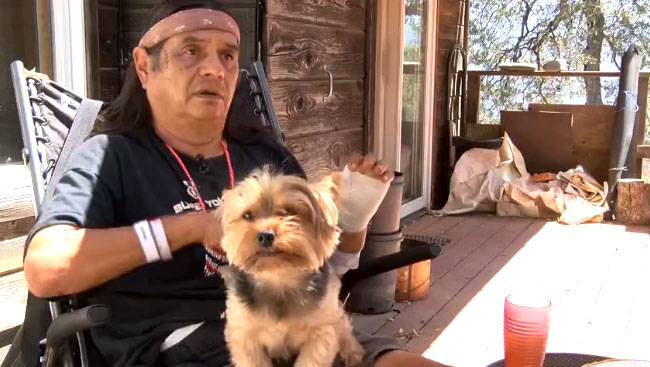 MIDPINES, Calif. -- A California man is lucky to be alive after being attacked by a 250-pound bear. And he says, if it weren't for the help of his dog, Benji, he might not have survived at all.

CBS affiliate KGPE reports that 66-year-old Larry Yepez from Midpines in Mariposa County was attacked by a bear early Thursday morning when he stepped out of his back door.

Yepez told KGPE that he came face-to-face with the bear and yelled at it to go away, but the bear continued to come towards him.

Yepez grabbed a plastic pot filled with dirt and hit the bear with it to try and ward him off. But, it didn't work. The bear nearly ripped off Yepez's wrist, clamping down. He also has stitches on the side of his head, cuts and bruises.

"I could hear the crunching the 'crrr' like that when he bit down on it, so that's why I tried to hit him again," said Yepez.

Yepez tells KGPE he is a former Marine. He said he used the survival tactics he learned to fight off the bear. He kicked the bear.

He said the Marine's taught him to remove the word can't from his vocabulary, and he kept on fighting. He eventually won, and he has his dog Benji to thank for that. Yepez says Benji never once left his side during the attack.

"He distracted that bear long enough that I could stand up on my feet and get out of there. In that sense, he was the hero. He saved me," said Yepez.

Despite being attacked from head to toe, Yepez drove himself to the hospital.

"I jumped in my van and went to the hospital and when I walked in I was just covered in blood all over me and they go, 'Oh my god, what happened to you?,' and I said, 'I just got attacked by a bear," said Yepez.

Yepez told KGPE he hopes people find inspiration from his story of survival.

"Never give up," he said. "Don't ever stop fighting, I mean if I had stopped fighting I wouldn't be here today doing this interview."

The California Department of Fish and Wildlife tells KGPE it is actively looking for the bear and it will be euthanized once found.