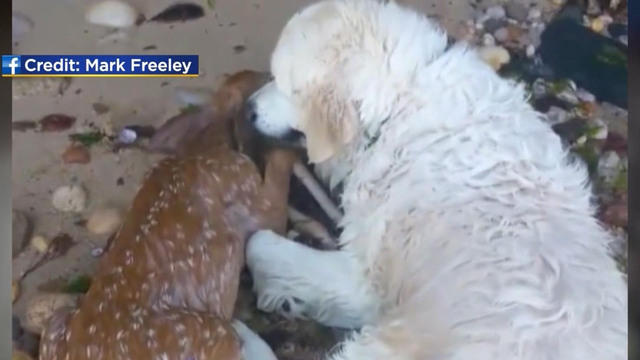 PORT JEFFERSON, N.Y. -- When a young deer got into trouble in New York's Long Island Sound, it took a team to bring it to safety: first a dog, then a few Good Samaritans, CBS New York station WCBS-TV reports.

The owner of Storm, an English golden retriever, knows he's loyal and caring, but on Sunday morning, Storm really surprised him.

Freeley recorded video of the rescue on his walk with Storm and his other dog Sara, not knowing what would come next.

As soon as the fawn reached the shore, Storm followed it, lying down next to the baby deer.

"And then he started nudging it with his nose and then started pulling it to make sure it was gonna be OK, I guess," Freeley said.

He immediately called experts to check on the fawn. As soon as they started walking on the beach, he said the fawn, likely spooked by the dogs, ran back into the water. That began rescue round two.

"This time it went out even further," Freeley said.

Freeley and Frank Floridia of Strong Island Animal Rescue League both waded into the water.

Floridia said it took about eight minutes and a rope to get a hold of her. He knew what Storm went through and felt his pain.

"The second rescue was a lot of anxiety," he said.

He credited the difficult part to his partner Erica Kutzing. She ran about a mile on the beach to help.

"I don't think that I could've done it without the help of my partner," he said. "At this point, I had come out, I was exhausted. My knee was blown out. I had collapsed on the beach."

Kutzing carried the fawn back to the rescue van. She said it was covered in ticks and had an eye injury.

The fawn is resting at an area animal rescue center until it can get back on its feet.