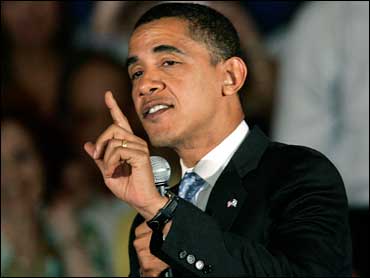 This column was written by Rich Lowry.

Barack Obama might be the first major candidate for president to support same-sex marriage.

He won't say as much. His definition of a "new politics" is capacious enough to allow for pose and slipperiness (as long as he's the one engaged in them). But his stance on a California supreme-court decision that ripped away any middle ground on the issue makes him operationally pro-gay marriage.

In California, a domestic-partnership law gives gay couples, in the words of the decision, "virtually all of the legal rights and responsibilities accorded married couples under California law." But that's not enough. Marriage must be redefined to include same-sex relationships. Any arrangement short of this is comparable to segregation: famously progressive California as Bull Connor's Alabama.

Obama's tone noticeably differed from John Kerry's in 2004. Kerry criticized the Massachusetts Supreme Court ruling in favor of same-sex marriage and said he'd support a constitutional amendment banning it. In contrast, Obama patted the California court on the head and said nothing about a proposed referendum in the fall to amend the California constitution to overrule the court. Obama makes Kerry look like a staunch cultural conservative.

If the California decision goes into effect in 30 days - as is usually the practice - thousands of gay couples will get married no matter what the public decides. California doesn't have a statute like the one in Massachusetts that prevents people from coming there from out of state for same-sex marriages. Many of the newlyweds will be from elsewhere. They will return home, the seedbed for lawsuits to have their marriages recognized by their states.

What's to stand in its way? Obama opposes a federal constitutional amendment to define marriage as between a man and a woman. He opposes the federal Defense of Marriage Act that prevents states from having to recognize same-sex marriages from other states. And he supports activist judges of the sort who find the California court's reasoning congenial.

Obama is a soft-toned cultural warrior, wrapped in the blandishments of change and bipartisanship. Roe v. Wade was a crucial catalyst for America's ongoing kulturkampf; it imposed a policy of abortion-on-demand on the nation, stoking a ferocious backlash. The Supreme Court and its liberal cheerleaders who thought it could force their preferred social change faster than the democratic process were the cultural aggressors.

So it is now. States around the country are giving legal standing to same-sex unions, but the California court insists the change is not fast or far-reaching enough. The court argued again and again that withholding the word "marriage" from gay unions denies them "equal dignity and respect." The court thus demands moral approval for these unions, and does what open-minded people everywhere are supposed to abhor: impose its morality on people who disagree.

If opposition to same-sex marriage is equivalent to bigotry, religious groups that oppose it are purveyors of discrimination and deserve to be treated as such under the law. Down this road is a significant challenge to religious freedom. Roe eventually discredited blatant judicial activism, but the California decision serves to revive it. If it stands, it will again legitimize judges governing by fiat.

That will bail out evasive liberal politicians who fear being forthright about their views and hope merely to step out of the way while judges impose them. For the cause of self-government, it's a disaster.
By Rich Lowry
Reprinted with permission from National Review Online