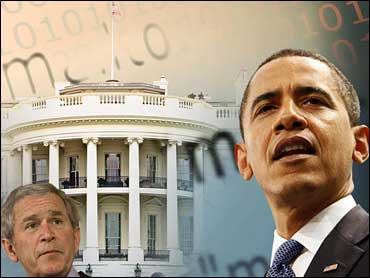 The Obama administration, siding with former President George W. Bush, is trying to kill a lawsuit that seeks to recover what could be millions of missing White House e-mails.

Two advocacy groups suing the Executive Office of the President say that large amounts of White House e-mail documenting Bush's eight years in office may still be missing, and that the government must undertake an extensive recovery effort. They expressed disappointment that Obama's Justice Department is continuing the Bush administration's bid to get the lawsuits dismissed.

During its first term, the Bush White House failed to install electronic record-keeping for e-mail when it switched to a new system, resulting in millions of messages that could not be found.

The Bush White House discovered the problem in 2005 and rejected a proposed solution.

Recently, the Bush White House said it had located 14 million e-mails that were misplaced and that the White House had restored hundreds of thousands of other e-mails from computer backup tapes.

The steps the White House took are inadequate, one of the two groups, the National Security Archive, told a federal judge in court papers filed Friday.

"We do not know how many more e-mails could be restored but have not been, because defendants have not looked," the National Security Archive said in the court papers.

"The new administration seems no more eager than the last" to deal with the issue, said Anne Weismann, chief counsel for Citizens for Responsibility and Ethics in Washington, the other group that sued the EOP.

The Executive Office of the President includes the president's immediate staff and many White House offices and agencies.

Tom Blanton, director of the National Security Archive, noted that President Barack Obama on his first full day in office called for greater transparency in government.

The Justice Department "apparently never got the message" from Obama, Blanton said.

The department defends the government when it is sued.