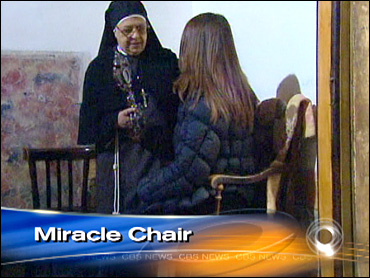 Pews packed for Mass aren't unusual in Naples, but it's what happens after the service that draws so many people to one particular church.

A nun crosses people who sit in it, and the stomachs of those seeking to become pregnant.

The cross she uses to trace the blessing that believers feel is linked to fertility contains bone and hair from a nun who spent her last days in the chair more than 200 years ago, and became Saint Maria Francesca of the Five Wounds of Jesus -- named because she is believed to have borne the "stigmata" -- the wounds suffered by Christ on the cross.

How sitting in the armchair is supposed to promote fertility isn't clear, Pizzey points out, but what is clear is that thousands believe in it.

"A woman told me about this saint," Michaela Mango says, "and we came, and slowly, we started to believe, and then..."

And then, after three years of infertility, "One month after we came here," Mango's husband, Pietro, says, holding their infant, "the saint put us on the path to have her."

Like many of the hundreds of babies whose birth is celebrated on the walls in the church, that girl was named after the saint. The walls are covered with birth announcements, blue ones for boys and pink for girls, from women who were childless -- until they sat in the chair blessed by the saint.

The connection to babies, Pizzey explains, is an icon of the infant Jesus.

Carved with its arms folded, it's said to have opened them when Maria Francesca came to clothe it, which was the first of two miracles that elevated her to sainthood.

The icon was stolen from a case in the church four years ago.

The first female saint born in Naples, Maria Francesca lived in a convent in the picturesque and chaotic Spanish Quarter after fleeing an abusive father and a forced marriage, Pizzey notes.

And even for a city where the veneration of saints is as much a part of life as the camorra, he observes, the pilgrimage to the chair is a phenomenon.

Women well past child-bearing age seek a blessing for their families, as do men who are already fathers and even grandfathers.

For those who want to start a family, Sister Giuliana isn't averse to giving the saint a helping hand, telling believers, "Use all the medical help the church allows for the intercession of Saint Maria Francesca to grant you the fruits of love."

But, Pizzey adds, you need more than faith to merit divine intervention, because the first question Sister Giuliana asks young women is always the same: "Do you have a husband?"