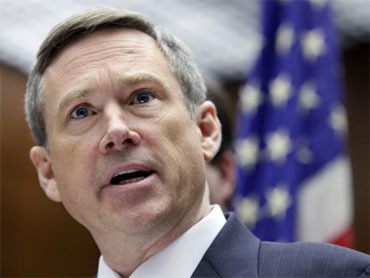 As Bloomberg first reported, another video has surfaced in which the Senate campaign of Rep. Mark Kirk (R-IL) inaccurately claimed that Kirk received the Navy's intelligence officer of the year award.

Kirk is running against state treasurer Alexi Giannoulias for President Obama's old Senate seat in a tight race that has become increasingly bitter and personal after Kirk first acknowledged that he inaccurately claimed that he received the award for his service in 1998.

In a statement released by his campaign on Wednesday, Kirk's former commanding officer Captain Clay Fearnow wrote that he was "deeply troubled" by the Washington Post story that broke the news of the inaccuracies on Saturday.

"First, the complete lack of a benefit of the doubt - the idea that someone could make an honest mistake has become so foreign that the immediate assumption has become - you misrepresented or worse you lied. In Mark's case neither is factual," Fearnow wrote. "And second, that an honest mistake related to the identification of a military award is the same as pretending to be in Vietnam when you were not. This also doesn't apply to Mark Kirk."

Fearnow also explained his reasons for nominating Kirk for two separate awards: a Navy and Marine Corps Commendation Medal, which he was awarded individually, and the Rufus L. Taylor Intelligence Award, which his unit received.

"I would further add, assertions I've seen that Mark Kirk embellished or exaggerated his record are ridiculous - he is one of the finest Naval Officers I have had the honor to work with," Fearnow added.

Countering Fearnow's defense of Kirk, Retired Colonel Jill Mogenthaler, who ran unsuccessfully as a Democrat in 2008 for a U.S. House seat in Illinois' 6th district, told CBS News that Kirk does not deserve the benefit of the doubt in regard to the intelligence officer of the year award.

Morgenthaler said that she has held onto the paperwork for every award she received during her own service.

"When you get awards, there's always a pomp and circumstance that goes with it," Morgenthaler said. "So there is no other way of looking at that award. He lied about it."