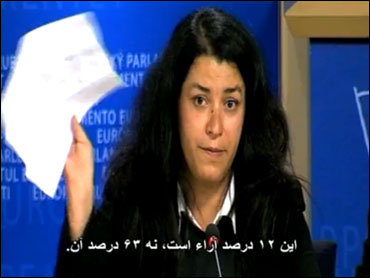 Marjane Satrapi (at left), who was behind the acclaimed animated feature film "Persepolis," and filmmaker Mohsen Makhmalbaf addressed a gathering of Green Party members of the European Parliament on Tuesday and presented a letter which they claim shows the real vote count from the disputed election.

A video posted on YouTube shows the two addressing the meeting in Farsi and English (the Farsi remarks are translated, so don't stop watching when you fail to hear a recognizable word right away). Makhmalbaf is reportedly a known acquaintance of opposition candidate Mir Hossein Mousavi.

IranWatch: Track the latest on the Iran election upheaval

The letter they present to the MEPs has been circulated for several days, but its contents cannot be verified. It is claimed the letter was a confidential note sent by Iran's Interior Minister (the Interior Ministry is in charge of running elections in the country) to supreme leader Ayatollah Ali Khamenei.

Below is the complete text of the letter, dated June 13, translated by CBS News:

Salaam Aleikum.
Following your concerns regarding the results of the presidential election and per your given discretion to have Dr. Mahmoud Ahmadinejad remain as president during this sensitive juncture. Therefore, everything has been planned in a way that the public announcement will be made in accordance with the interests of the regime and the revolution. All necessary precautions have been taken to deal with any unexpected events of election aftermath and the intense monitoring of all the parties' leaders as well as the election candidates.

However, for your information, the real votes counted are as follows:

Again, CBS News has no way of verifying the authenticity of the document, which has been widely circulated by Mousavi's supporters. The official results, as announced by the government just hours after polls closed, showed a landslide victory for Ahmadinejad – with more than 60 percent of the vote tally.

Veteran journalist Robert Fisk also reported on the letter Thursday in The Independent.

He asks some very good questions of the purported evidence, photocopies of which have been widely disseminated among opposition supporters.

"Could this letter be a fake? Even if Mr. Mousavi won so many votes, could the colorless Mr. Karroubi have followed only six million votes behind him? And however incredible Mr. Ahmadinejad's officially declared 63 per cent of the vote may have been, could he really — as a man who has immense support among the poor of Iran — have picked up only five-and-a-half million votes?"

There has been little certainty with regard to any of the "facts" to emerge from Iran during the past week. Mr. Fisk probably hit the nail on the head with his following paragraph, which highlights the level to which propaganda is driving this news story:

"The letter may well join the thousands of documents, real and forged, that have shaped Iran's recent history, the most memorable of which were the Irish passports upon which Messers Robert McFarlane and Oliver North travelled to Iran on behalf of the US government in 1986 to offer missiles for hostages. The passports were real – and stolen – but the identities written onto the document were fake. Mr. Ahmadinejad's loyalists will undoubtedly blame "foreigners" for the "letter" to Ayatollah Khamenei. But its electrifying effect on the Mousavi camp will only help to transform suspicion into the absolute conviction that their leader was quite deliberately deprived of the presidency."