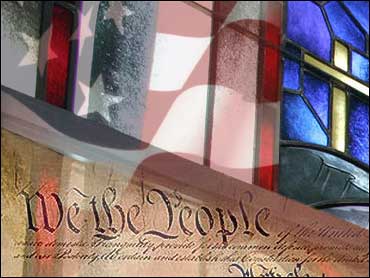 A group of atheists filed a lawsuit Tuesday seeking to remove part of a state anti-terrorism law that requires Kentucky's Office of Homeland Security to acknowledge it can't keep the state safe without God's help.

American Atheists Inc. sued in state court over a 2002 law that stresses God's role in Kentucky's homeland security alongside the military, police agencies and health departments.

Of particular concern is a 2006 clause requiring the Office of Homeland Security to post a plaque that says the safety and security of the state "cannot be achieved apart from reliance upon almighty God" and to stress that fact through training and educational materials.

The plaque, posted at the Kentucky Emergency Operations Center in Frankfort, includes the Bible verse: "Except the Lord keep the city, the watchman waketh but in vain."

"It is one of the most egregiously and breathtakingly unconstitutional actions by a state legislature that I've ever seen," said Edwin F. Kagin, national legal director of Parsippany, N.J.-based American Atheists Inc. The group claims the law violates both the state and U.S. constitutions.

But Democratic state Rep. Tom Riner, a Baptist minister from Louisville, said he considers it vitally important to acknowledge God's role in protecting Kentucky and the nation.

"No government by itself can guarantee perfect security," Riner said. "There will always be this opposition to the acknowledgment of divine providence, but this is a foundational understanding of what America is."

Kentucky has been at the center of a series of legal battles involving religious issues in recent years, most involving displays of the Ten Commandments in public buildings. One case went to the U.S. Supreme Court, which ruled in 2005 that such displays inside courthouses in two counties were unconstitutional.

Kentucky isn't the only state dealing with religious issues, but Ed Buckner, president of American Atheists, said it's alone in officially enlisting God in homeland security.

"I'm not aware of any other state or commonwealth that is attempting to dump their clear responsibility for protecting their citizens onto God or any other mythological creature," Buckner said.

State Rep. David Floyd, R-Bardstown, said the preamble to the Kentucky constitution references a people "grateful to almighty God," so he said he sees no constitutional violation in enlisting God in the state's homeland security efforts.