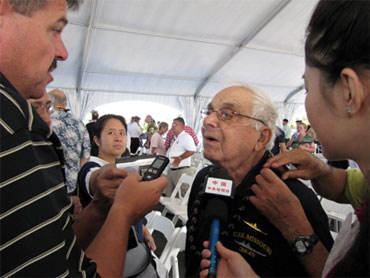 A symbol of Christianity that sits atop church steeples, dangles from necks and hangs on walls is now ending up in the mouths of the faithful, over the objections of some religious officials.

A mass-produced chocolate cross is being sold this Easter by Russell Stover Candies Inc. in about 5,000 stores nationwide, which experts say is apparently a first for a major American company.

"Obviously they've seen that there's a market for chocolate crosses at Easter," said Lisbeth Echeandia, a consultant for Candy Information Service, which monitors candy industry trends. "I don't see it growing tremendously but I think there would be growth in the Christian market."

However, not all Christians are happy about it. Chomping on a chocolate cross can be offensive to some, said Joseph McAleer, a spokesman for the Roman Catholic diocese in Bridgeport, Connecticut.

"The cross should be venerated, not eaten, nor tossed casually in an Easter basket beside the jelly beans and marshmallow Peeps," he said. "It's insulting."

Nonetheless, Kansas City-based Russell Stover, the third-largest American chocolate manufacturer, said it is targeting some of the most devout Christians — Hispanic Americans.

Pangburn, which Russell Stover bought in 1999, has long had a hold in that market. The milk chocolate cross is about 6 inches high, adorned with a floral bouquet and filled with caramel made of goat's milk, popular in Mexico and Latin America. Its packaging features Spanish more prominently than English.

Russell Stover President Tom Ward doesn't expect the chocolate cross to overtake the chocolate bunny, but he does expect it to bring in new customers who "wouldn't buy rabbits."

Ward said Russell Stover considered making other traditional images out of chocolate but eventually opted not to.

"A molded Jesus, for example, would not be a good call and a cross with Jesus on it wouldn't be a good idea either," Ward said.