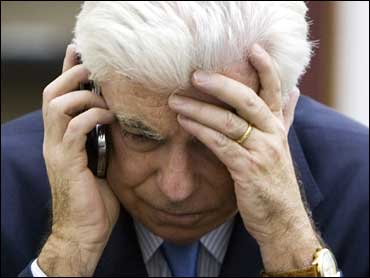 With an edge in his voice, the Senate Banking Committee Chairman said he feels the administration ought to shoulder much of the blame for the situation, which has generated populist outrage.

"The administration sought changes in [executive compensation rules]," Dodd said. "At the time they seemed, at least in one case, relatively technical to me, having no connection whatsoever to the AIG issue. So we agreed to a couple of those changes in order to preserve the amendment."

"Had there been any connection at the time or any notification that somehow this was involved with AIG we would have rejected that entirely," he said. "But at the time that was not the connection."

Dodd admitted to CNN Wednesday that at the request of an unnamed administration official, his staff diluted the executive pay provision of the stimulus bill which would have applied retroactively to government funded companies.

He would not name any administration officials involved in the redrafting.

"For six weeks I was criticized and ridiculed for having written too restrictive a section on executive compensation, bonuses and golden parachutes," Dodd told reporters outside his Capitol Hill office today. "I find it somewhat ironic that the people who were most critical of me being too tough...are now accusing me of not being restrictive enough."

"I would have expected people to stand up a little on this matter," he said. "They sought it. I didn't."

Dodd faces a tough re-election campaign in Connecticut in 2010. Asked what effect the AIG scandal will have on his chances, Dodd said while there was once "season for politics in America," there is now a "permanent season."

Dodd also said he would be supportive of an effort to repeal the amended provision in the stimulus bill and said he is committed to retrieving taxpayer money lost in the bonuses.

And he reiterated his confidence in the Treasury Secretary Timothy Geithner. "I would be hard pressed to think of another secretary of the Treasury that has walked into the job with as many problems as this man is confronting - it is breathtaking," Dodd said, adding that Geithner is a "talented man."

An administration official tells CBS News that while Dodd did edit the provision after the Treasury department raised concerns, the department did not "insist" on amending the bill.