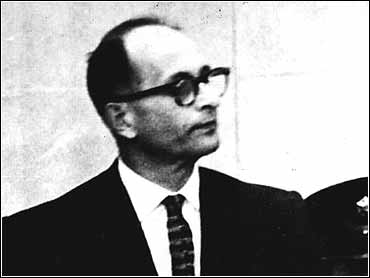 Determined to win the Cold War, the CIA kept quiet about the whereabouts of Nazi war criminal Adolf Eichmann in the 1950s for fear he might expose undercover anticommunist efforts in West Germany, according to documents released Tuesday.

The 27,000 pages released by the National Archives are among the largest post-World War II declassifications by the Central Intelligence Agency. They offer a window into the shadowy world of U.S. intelligence — and the efforts to use former Nazi war criminals as spies, sometimes to detrimental effect.

The war criminals "peddled hearsay and gossip, whether to escape retribution for past crimes, or for mercenary gain, or for political agendas not necessarily compatible with American national interests," Robert Wolfe, an expert on German history and former archivist at the National Archives, said at a news briefing announcing the document release.

In a March 19, 1958, memo to the CIA, West German intelligence officials wrote that they knew where Eichmann was hiding. Eichmann played a key role in transporting Jews to death camps during World War II. "He is reported to have lived in Argentina under the alias 'Clemens' since 1952," authorities wrote.

But neither side acted on that information because they worried what he might say about Hans Globke, a highly placed former Nazi and a chief adviser in West Germany helping the U.S. coordinate anticommunist initiatives in that country.

"Entire material has been read. One obscure mention of Globke which Life omitting at our request," CIA Director Allen Dulles wrote in a Sept. 20, 1960, internal memorandum, after Life magazine purchased Eichmann's memoir.

Among the other findings: