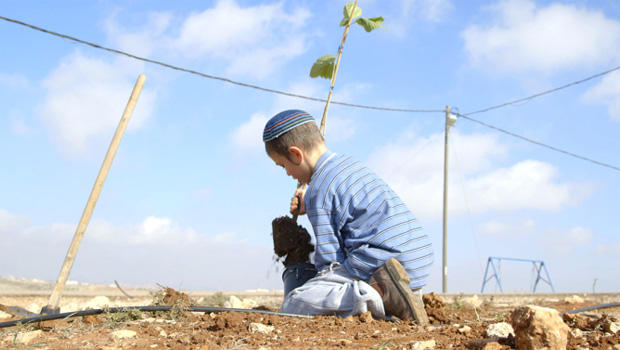 Encroachment is the keyword in the West Bank, land claimed by Israel’s military during the Six Day War, in 1967. In the decades since, tens of thousands of Israeli settlers have created settlements (or “outposts”) in the occupied territories. It is the frontline in clashes between Israelis and Palestinians, and the bargaining chip for any discussions about a “two-state solution” to Middle East tensions. And it may be one of the most poorly-understood flashpoints in the world today.

In Shimon Dotan’s incisive new documentary, “The Settlers” (now playing in New York City), the history of the settlements and its place in the psyche of the Jewish people is explored in surprisingly clear detail -- enough to make the viewer realize just how little we have understood this region’s history.

Growing out of a fundamentalist strain of Judaism in which the lands of the western shores of the Jordan River and the Dead Sea were believed to have been delivered to the people of Israel by God, the initial settlements were at the instigation of Orthodox religious and right-wing leaders in the late 1960s. Crudely constructed, they nonetheless put down markers of political power in a land where Palestinian residents had no political rights.

There are now approximately 2.7 million Palestinians and 400,000 Israelis in an area slightly larger than Delaware. It is today divided into three zones of control (though the term “control” is here used loosely).

A report issued in 2005 found that the Israeli government had been secretly funding illegal settlements, despite international assurances that it would not expand Israelis’ presence in the occupied territories. In addition to those building settlements, tens of thousands of secular Jews have emigrated there, seeking more affordable housing, or the luxurious retirement communities and resorts that have sprung up in the desert.

“In very rough numbers, it’s about 20 percent [that] are there for ideological/religious reasons, and about 80 percent are there for economic reasons,” Dotan said.

“Nevertheless, those 20 percent, they are driving the settlement enterprise. They’re the driving force, and we have to be more attentive to the trajectory that they are aiming at. They are the driver in the locomotive or the pilot in the cockpit, and the rest I would say are passengers.”

Passengers in a system that resembles apartheid, where infrastructure -- including entire roadways -- has been constructed in order to keep Israelis and Palestinians separate.

Extremism on the part of settlers refusing to give up their land led to the assassination of Prime Minister Yitzhak Rabin in 1995, and to a new generation, the “Hilltop Youth,” who are willing to engage in violence to maintain the settlers’ dominance.

Dotan’s new film gives invaluable insight into how this region (which has been such a hotbed of political strife, despite handshake ceremonies at various accord signings) came to be. By presenting archival footage of the West Bank and bringing his cameras among the present-day settlers, he gives resonance to their history and previously-unrecognized depth to their ambitions and point of view.

Born in Romania, Dotan grew up in Israel and taught at Tel Aviv University. He is currently a cinema professor at NYU and the New School in New York City. He previously explored the stories of Palestinian prisoners held in Israeli prisons in his 2006 documentary, “Hot House,” a prize-winner at Sundance. His latest film gives voice to settlers, as well as to former Israeli military officers, human rights activists, philosophers and lawyers, whose commentary vividly clarifies the difficulty of fashioning a world of co-existence.

“I made it clear before we started filming that I am against the settlement enterprise, I think it’s a total threat to the state of Israel,” the director said, about meeting his interview subjects. “And I promised them I would not manipulate what they had to say and I would try to give enough screen time so that their ideas would come through thoroughly, and not [as] snippets.”

His subjects were surprisingly candid and engaged. “Generally speaking, people have a natural tendency,  we want to answer questions that we are asked. At the same time I was genuinely curious and I am genuinely interested to hear what they have to say. And I think [with] those two components, in most cases a real dialogue emerged.”

What surprised him about engaging with the settlers? “My recognition of how complex human beings are. One hand, they can engage in actions that are certainly wrong in my view, but at the same time they are good parents, they can have a full cycle of life that is positive in every other aspect. And this complexity I find invaluable to recognize because, especially in a political environment like we have in Israel, and you have in America as well, if you measure an individual only by the component that you oppose him, there is very little chance of change. If you capture a more rounded presence of the individual, there is a chance that you connect to the entire person that is in front of you and possibly there is a chance of change, in either him, or in you! There is a better chance of connection we are searching for, and for any movement in the political spectrum.”

The ideologues who have put down stakes in the West Bank, Dotan says, are harder to convince. “The religious person presents his religious beliefs as the ultimate way that he is willing to live his life and accepts the order of the world. There is nothing to talk about any further, there is no dialogue. I was curious to hear how they see the world, but there was no real chance in the world that I could try to convince them that it is the other way.”

The reaction to the film in Israel (it has not been screened in the West Bank) has been to open dialogues, while also inviting criticism from both the left (who thought he was too soft on the settlers) and the right (who thought he was too hard). Yet it exposes a strain in Israeli society that has no interest in democracy, who instead believe in the need for a Jewish state built on religious grounds.

Dotan is pessimistic that sharing the West Bank is in the cards. “I don’t think that is going to materialize.  This one-state solution that was mentioned so haphazardly by Trump in his meeting with Netanyahu, it’s a topic that’s often been mentioned by most on the extreme left and most on the extreme right; one man, one woman, one vote, and it would be a bi-national state.

“We have now in effect a bi-national state without voting rights for the Palestinians. All of the multinational states in recent decades disintegrated. To look for that as a solution in the Middle East with the Israelis and Palestinians, this is a complete nightmare. I think it’s a recipe for even a bigger catastrophe.

“The only proposition that may have a chance is to recognize the political aspirations of Palestinians, create two states, and hopefully for many decades to come we will live in peace.”

“The Settlers” (Bond/360) is playing at the Film Forum in New York City through March 14, and will open later this month in Los Angeles, San Francisco, Larkspur, Calif., and Pelham, N.Y., with other engagements to include Cleveland, Columbus, Salt Lake City, and Stanford, Conn. Not rated. 110 mins.

To watch a trailer from “The Settlers” click on the video player below.